I believe food traditions are important but fear they endangered in today’s globalized, homogenous world. Our unique differences need to be fiercely upheld and for this reason I never make cookies – but I do make biscuits, or even more correctly, bikkies.

‘Cookies’ is absolutely correct if you are in America, or are in fact American. ‘Cook­ie’ comes from the Dutch ‘koeke’, meaning cake. This term was adopted by Americans in opposition to the English, who used the French term ‘biscuit’ meaning twice cooked, around the time of the War of Independence.

Australia and Canada followed the English lead and adopted the term ‘biscuit’. But be­cause we are Aussies, we have bikkies. Long may it continue.

These are four of my favourites, I’m sure you can create your own. Note: These measure­ments apply to half the basic mixture, so once you have a batch divide the mix in two and make two different types.

Cinnamon & Currant
Add ¼ teaspoon ground cinnamon to the flour and work in 2 tablespoons currants to the finished dough – this ensures that flour doesn’t get stuck in the crevices of the cur­rants. Once the biscuits are baked, scatter immediately with a generous amount of cast­er sugar and allow to cool completely.

Almond & Lemon
Add 100g flaked almonds and the grated zest of a lemon to the mixture. Form the mixture into crescent shapes. Once baked and while still hot, very carefully toss in plenty of icing sugar and then allow to cool.

Cornflakes
Add ½ cup cornflakes and 2 tablespoons sul­tanas (optional) to the finished dough. Roughly crush 1 cup extra cornflakes and press these onto the outside of the balls of mixture.

Orange & Coconut
Add 1 tablespoon desiccated coconut and the grated zest of one orange to the mixture. Toss the balls of dough in extra coconut be­fore baking. 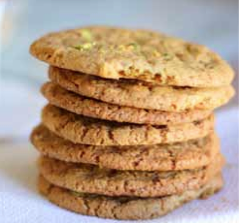