Home » A Japanese Twist On This Year’s Vintage

Windowrie Winery, a leading organic winegrower in the region, have recently wrapped up their 2015 vintage. They have had a frosty, but favourable growing season, and the outlook for vintage is positive.

“Our yields were somewhat lower than average due to the frost in 2014,” Windowrie’s viniculturist, Jason O’Dea said, “however this helped increase the quality of the fruit, especially in the shiraz and chardonnay vineyards.”

The harvest began on Australia Day, and was finished by Easter.There was a lot of focus on preserving flavours and complementary techniques, with the aim of “creating a sense of place from the vineyard and region”.

The team behind Windowrie invited Japanese winemaker Shige Kimura, who has been an industry professional for over two decades. Kimura’s role in the team was to challenge the group to “re-think and re-evaluate” every one of Windowrie’s harvesting and winemaking processes.

The special visit from Kimura was a valuable experience for the team. “Having Shige with us for vintage was fantastic,” said Windowrie winemaker Anthony D’Onise. “He gave us a new perspective on our winemaking, as well as a better understanding of the Japanese market and palate.”

Windowrie’s relationship with Japan stretches back over a decade of export and looks to only get stronger; “we’re lucky to have had him in the region and will be working closely with him in the future,” Anthony said. 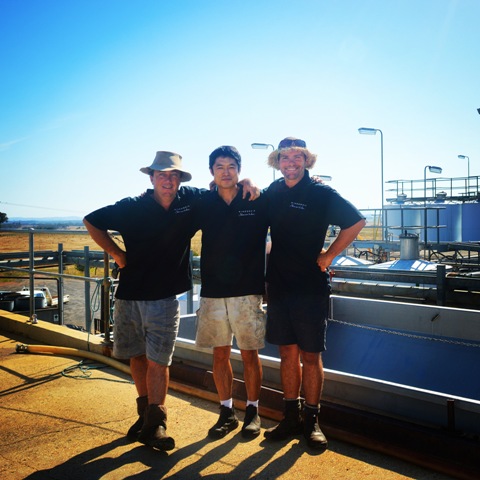