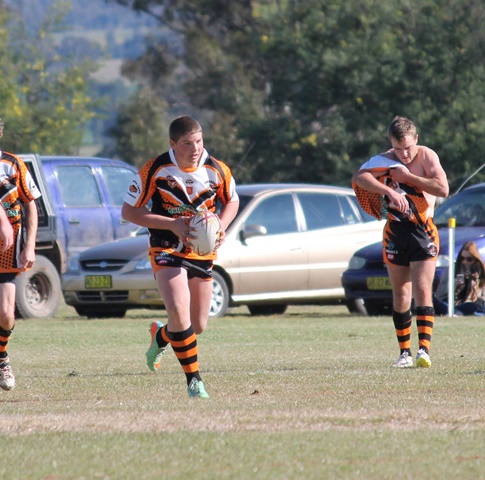 Last Saturday the Canowindra Tigers Youth League players ventured out to Gooloogong to verse Eugowra. All players were determined and gave 100% as they beat the Eagles 18 – 14. The game opened up with hard defence from both sides but it was Half Back Luke Tarrant who sliced his way through the Eagles to score the first try of the day under the posts. Next, Jayden Brown’s 40/20 had the Tigers in perfect try scoring range and with couple of hit ups from Dan Friend and Jake Smith Jayden soared under the posts for try number two. The third try for the Tigers was scored by Bailey Campbell, his first try of the season. These three great tries made the half time score 18 – 4. Canowindra knew they’d have to work hard to retain their lead as a determined Eagles came back out fighting. Though the Tigers were scoreless in the second half there was strong defence by Alex and Sam Willson and good play by Will Middleton and Tim Wythes. Tinei Sauvao made a fantastic 40 metre break, weaving through the Eagles. Great work also to Jordi Brown and Ebann Malae for their tackling skills. As the last minutes of the game ticked down, the Eagles managed to score on the sideline, adding to the tension. The Tigers took their time and finally the hooter sounded as they ran out winners 18-14. The boys now prepare for next week’s game against Peak Hill to determine who will make the Gran Final. Good luck Youth League!