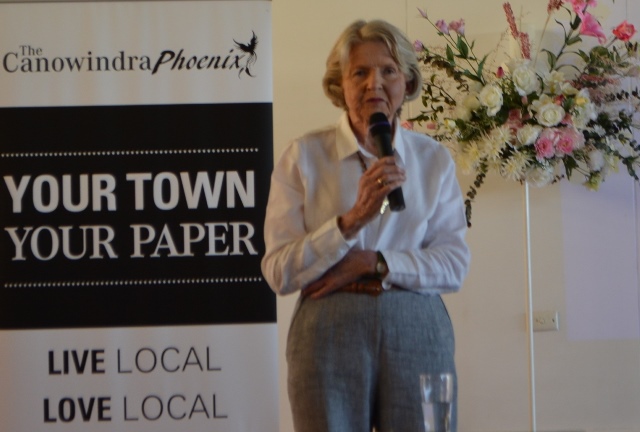 The Phoenix’s lunch at the Bowling Club on Thursday to celebrate women world-wide was a fantastic display of ‘girl power’. 48 women from near and far attended including the Canowindra High and Canowindra Public School Principals who were accompanied by students from Canowindra High.
Phoenix Editor Rhi Quinn opened the event and was followed by First Speaker, Tamara James, from our sponsor PulseHR, who spoke of women in the workforce. A delicious frittata was served up by Kylie Lawrence which was followed by the introduction of our Guest Speaker, Ailsa Pottie, who delivered an interesting, enlightening and informative speech. Ailsa is the sister of Dr Catherine Hamlin, who formed the charity we raised money for at the event, and had many interesting tales to tell of young girls who had been treated at the hospital in Ethiopia and gone on to work there… with some eventually becoming midwives and surgeons. After a dessert choice of strawberry or banoffee cheesecakes the raffle prizes donated by local businesses were handed out. In total $500 was raised for the charity Hamlin Fistula Ethiopia (Australia), which will go towards women who suffer from complications after an obstructed labour. We would like to thank Ailsa for her wonderful speech, PulseHR and First Choice for sponsoring the event, Kylie Lawrence for catering, the Bowling Club for letting us use the space for free, the businesses who kindly donated raffle prizes and thank you to all the ladies who came along and showed their support for women all over the world and for this worthwhile charity. Bring on next year!
By Rhi Quinn