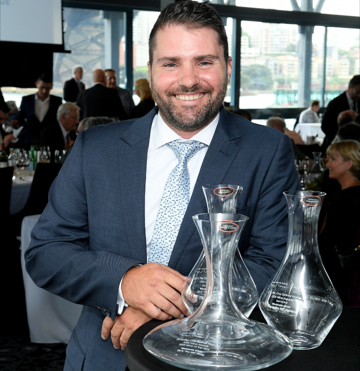 The 2016 Pier One Sydney Harbour NSW Wine Awards has just announced the main Trophy winners with results exciting judges,
industry professional and wine lovers alike. The champion of the Awards was Windowrie Estate, who were awarded the ultimate
title of ‘Pier One Sydney Harbour 2016 NSW Wine of the Year’ for their 2015 “The Mill” Shiraz. The Trophy was claimed by winemaker Anthony D’Onise who was representing Windowrie Estate owners the O’Dea family. Their winning Shiraz was described by PJ Charteris as a worthy winner and “a wine that expresses its beautiful fruit first and foremost. It is great to see fruit and distinctive varietal fruit character as the defining features of a wine”.

President of the NSW Wine Industry Association, Tom Ward thanked all involved and commented on the high quality of judges involved in this year’s show. He also said, “This year we continued the theme of going to the regions for judging. We were lucky enough to spend time in the Hunter Valley and I think this is an unique way of judging that exposes not only the judges to the region but also allows the region to get engaged with the show – we appreciate all the people that gave their time to assist in the event. I am
happy to announce that next year we are looking to host the wine show in Mudgee and working with them to deliver another great experience.”