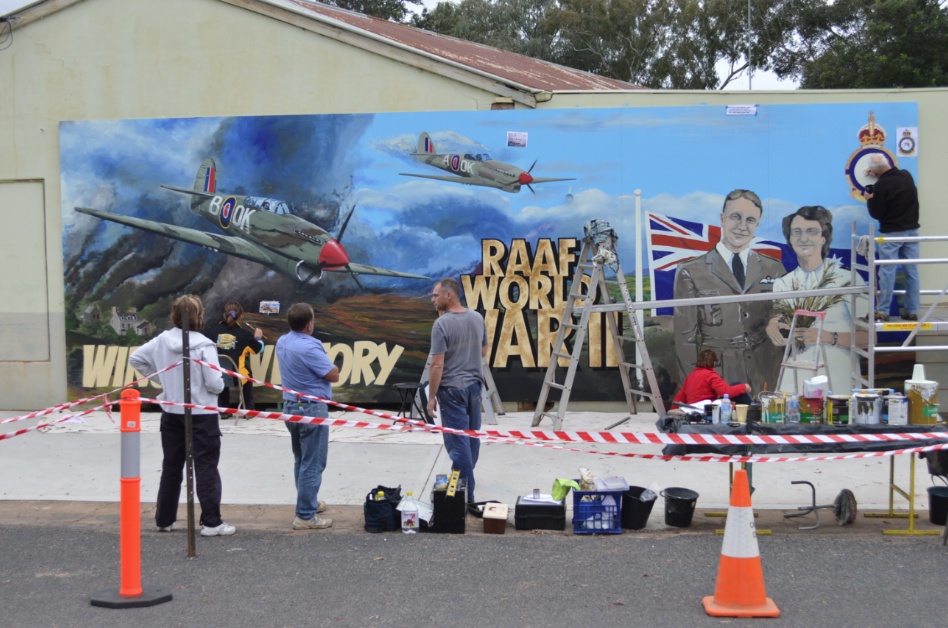 They say third times the charm and for Eugowra this weekend that was certainly the case. Artists flocked from all over Australia to help create works of art around the town, along with Mother’s Day market stalls, dog training, car shows and more. The artists form a group known as the Letterheads who “keep the traditional skills of sign writing alive” to quote Pat Smith, a supplier for Alupanel Distributors, who help transport the materials.

Jodie Greenhalgh is the mastermind behind the murals. When asked where her inspiration came from she replied, “As a town, Eugowra was dying. I’d watch buses drive straight through without stopping every day.” Together with her friend Christine they had the idea to paint the town in keeping with its history and culture and the result of their effort can be viewed on every street.

It’s American-Australian Rudy Kistler’s first time at the event. Rudy, with help from his wife, created a cheeky-eyed kelpie lying on a chequered blanket. The 3-D chalk drawing can be viewed on the pavement outside the Newsagents. Local schoolchildren also helped by sketching their interpretations of the dog’s daydreams down the path.  It’s another first this year for Australian Horse Drawn Services who have been transporting happy locals through the streets with the help of their horses, Ned and Oscar. Possibly one of the most interesting murals is the WWII scene drawn on the wall of Edward Strong’s house. Mr Strong was a pilot in 450 Squadron and his plane, along with another local who was also in the Air force, features in the picture. To the right of the mural is Mr Strong on his wedding day with his wife, who was in the British Army Nursing Corps. Even the rainy weekend weather couldn’t wash away the colourful enthusiasm…and hopefully won’t wash away the paint!