Home » Walkathon Washed Out But Not Left Out 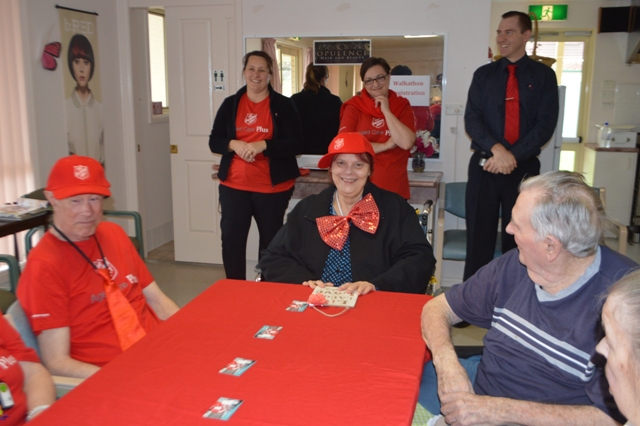 Rain may have ruined Canowindra’s Moyne Aged Care Centre’s Salvation Army walkathon last Friday, but this did not mean nothing could be done, with residents and staff still enjoying a morning of indoor activities. The Salvation Army Aged Care Plus Centres has held walkathons across NSW, QLD and the ACT from last Thursday, and these will continue until September 16.

The initiative seeks to raise over $80,000 for The Freedom Partnership- The Salvation Army’s national initiative to end modern day slavery. Staff and residents at the Moyne Aged Care Centre, part of the Salvation Army Plus Group, were due to walk 10 laps around the outside of their building, but with rain tumbling down, it was decided that indoor activities would be more appropriate instead.

While hot dogs and ice cream were still served, despite participants no longer having to walk, they engaged in activities such as games, dancing, trivia, and enjoyed other yummy food for their efforts. The staff and residents were able to raise $581 through sponsorship from the day,
and a further $100 will be coming in from an extra donation.

While the walk had to be cancelled, residents and staff at the Centre still had a great time, and their efforts went to a very good cause. The annual Walkathon initiative, now in its eighth year, has raised almost $500,000 to date, rallying Centre residents and their families, carers and the community to raise awareness and funds for The Freedom Partnership.

Funds raised by the Walkathon have had a significant impact in transforming the lives of modern day slavery victims in Australia. A young person who needed to leave home due to the risk of a forced marriage, has been supported by the Fund to access accommodation and a weekly living allowance so that she can focus on completing her education, finding employment and rebuilding her life.