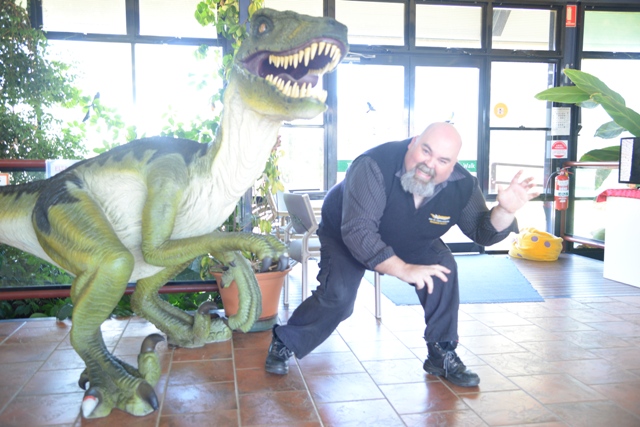 The reptile, not a real one but a life-sized model, is on lease at the Age of Fishes Museum until further notice, and has been brought to town to visit its ancient ancestors in the fish that are on display at the Museum. It’s staggering to think that a fish could be related to a dinosaur, but science has proven that all land animals have evolved from fish over millions of years.

The velociraptor has arrived at the Age of Fishes museum because many of the fish on display at the Museum are actually related to it. The fish fossils discovered in Canowindra that are on display at the Museum are around 300 million years, and some species of fish’s front limbs developed over time to form arms and legs. This led to the evolution of amphibians, which over many millions of years eventually evolved into reptiles and dinosaurs.

Mr Keedle said he had wanted a dinosaur to make an appearance at the museum to visit its ancestors, and when joking about this on the phone to Mr Kapitany, a deal was actually struck. “I said to Tom Kapitany ‘it would be great to have one of your dinosaurs come and see its ancestors’ and he said ‘I’ll see what I can do’, and then sent a velociraptor up to us,” Mr Keedle said.

“I believe it’s the first dinosaur to come to Canowindra. It’s a life-sized, 70 million year old velociraptor, and we’ve unofficially named it ‘James’.” The velociraptor is currently being kept inside the main front doors at the Museum, but may be moved outside from time to time so people can see it better.