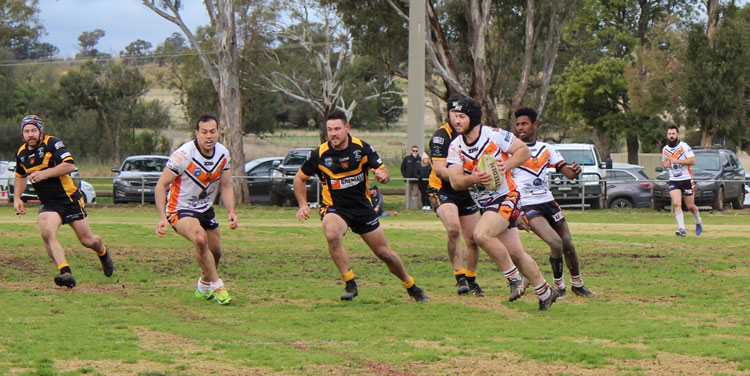 The Tigers went out on attack in Grenfell, beating the Goannas convincingly on Sun-day in Round 16. The Tigers brought home the points in two grades out of three. Youth league won 34-18, league tag went down in a strong performance 18 to nill and first grade brought home the chocolates with a convincing win 62-6. Players’ players Jay Cogan in the Juniors, Jess Fisher league tag and shared in first grade Ronnie Lawerence and Pedro Tapin.

For the youth league, the team is back on track with a solid performance. This win surely will clinch the minor premiership for the young Tigers. Tyler Byron dived over first and converted by the ever reliable Luke Wheeler to make for an early lead. Grenfell hit back, when their centre broke through to score in the corner.

After some positive words from coach Cal Clyburn, the Tigers played a better style of footy in the second half. Tyler Reid found Tapin in a hole to lengthen the lead to 24-8. Grenfell scored again to narrow the gap trailing 24-14. Some after Connor Monroe dived over from dummy half. The convert-ed try extended the lead, 30-14.

The Goannas fought back to narrow the score. The game ended well, with Tyler Baron scoring his third try to push the final score to 34-18.

In the league tag, Grenfell are the com-petition leaders and were expected to run away with the game. They led 14-0 at the break, but the Tigresses had other ideas and held them to only one try in the second half. The Canowindra girls put in a gallant effort, and were unlucky not to score on many occasions.

Grenfell started strong in first grade, scoring the first try to lead 6-0. This jerked the Tigers into action, then playing classy football. Canowindra defence clicked into gear, holding whatever Grenfell dishing out.

From repeated sets, Ronnie Lawrence found Kain Earsman on the angle. Then Nathan Whatman scored to even up. Shortly after, Lawrence finished off the movement to find the line which was converted to push the score to 12-6.

Canowindra gained the ascendancy midway through the first half. Whatman burst through and sent a neat flick pass to Middleton who threw a great ball to Tim Roberts. A little frustrated, the Goannas let their discipline go which only gave the Tigers more possession.

The Tigers continued to apply pressure, with the backline firing and Burns putting in a clever kick finding Tapin, who again found room and sent a flick pass back into Jonico to score out wide.

Our boys weren’t done when nine minutes remained in the first half. A converted try by Dine had the score at 30-6 at the break.

Canowindra continued their entertaining display, which resulted in a converted try to Blake Willson.

There were a number of sin bins with both sides having players on the sideline.

With 24 minutes left, the Tigers lifted their intensity in defence and gradually the Goannas were tiring.

Shortly after, Lawrence put Harry Whatman over for a converted effort. From a penalty tap Jonico put Tim Roberts in the corner, 50-6.

After another penalty, Tapin went through a huge hole to score his third try, 56-6.

Great backline movement found the ball thrown out to find Tim Roberts, his third converted by Burns, to move the score to 62-6, which was the final standing.

This weekend, first-placed Tigers clash with second-placed Manildra at the Oval. A win here will clinch the minor premiership.