You are here: Home / Articles / Then and Now…Nyrang Creek Hall To Canowindra Men’s Shed 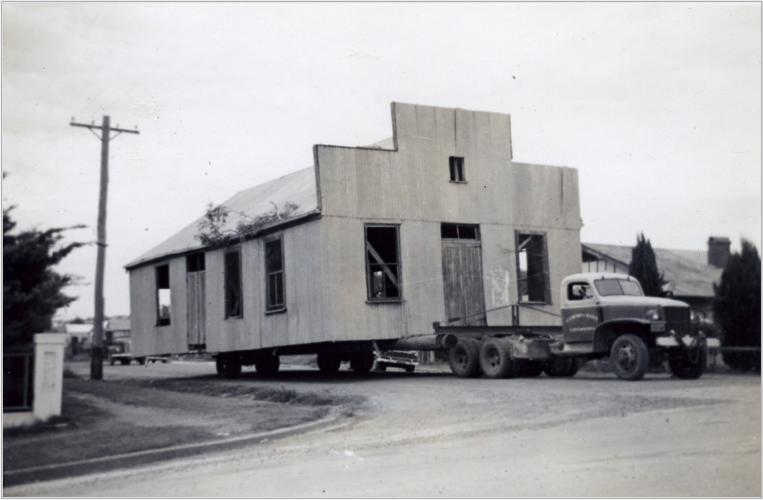 The hall used since the early 2000s as the Canowindra Men’s Shed has an interesting history both before and after it was moved to Canowindra in 1960 to be renovated as the Scout and Guide Hall. Nyrang Creek grew as a settlement along the road surveyed in 1862 from Forbes, via Eugowra, in the gold rush days. The fertile lands attracted free selectors who flocked to the district from 1865.

By the early 1900s, Nyrang Creek was the centre of a closely settled farming community. In 1911, Nyrang Creek Public Hall was opened with due ceremony as a centre for social functions. Thomas Mobbs Jnr built it with much voluntary labour and fundraising. Dave McCarron was the first secretary and Tom Bassett the first treasurer. It was a basic unlined, corrugated iron building in the days before electricity and very cold in winter with the only heating a small open fireplace in the attached kitchen. The hall was also used as a school from 1935 to 1941 and continued as a community centre until the early 1950s when it fell into disuse.

In September 1960, it was moved in one piece into Canowindra by Neville and Ross Bowd of Bowd’s Transport on the back of their GMC low loader. After much fundraising, the hall was clad and renovated as the Scout and Guide Hall. After both Scout and Guide movements closed in Canowindra, it had various uses as a shop until its third life as The Men’s Shed.