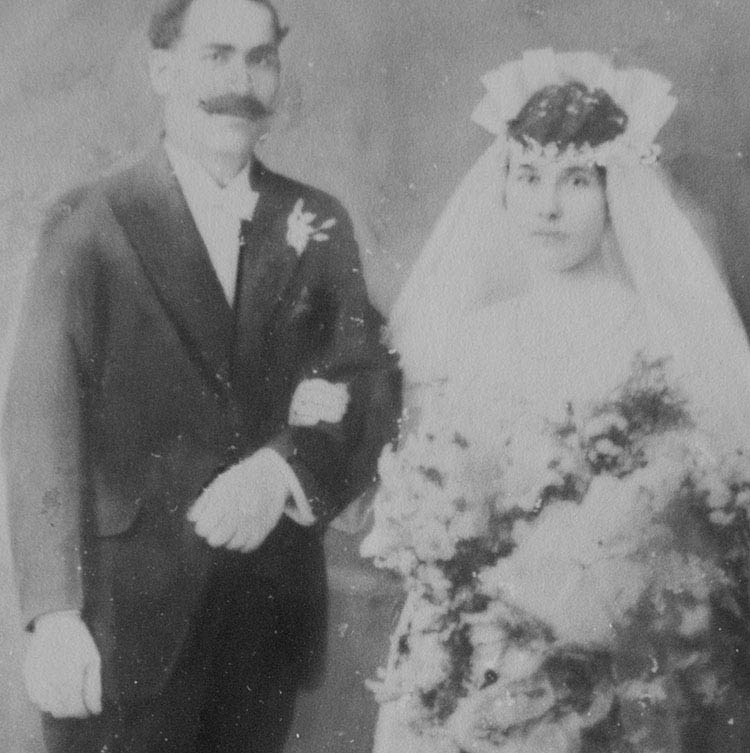 Peter and Stamatina Stathis on their wedding day in 1921.

The search is underway to track down the elusive Stathis Cup which was played for by local rugby league teams in the 1920s to 1930s.

With family connections to the lost trophy, John Minchin has provided the following information in the hope that someone may be able to tell him more about the trophy – or even better, to find it.

Perhaps it is sitting in someone’s shed, lounge room or storage room, just waiting to be discovered. Perhaps a photo of a winning team with the trophy can be found. Perhaps it was not a physical cup at all? Any information would be greatly appreciated.

Here is what is known of the Stathis family: Panagiotis “Peter” Stathis was born in Keramouto on the island of Kythera, Greece on 24 October 1891. He was the son of Papa Giorgios, who was a priest in Keramouto.

In 1909 at the age of 18, Peter migrated to Australia, arriving in Sydney on 22 May. He commenced working for Cominos Oyster Saloon in Pitt Street, Sydney. In 1910, he ventured away from the city to work for Mr G Potiri at Walcha, then to Brisbane to work for the Frigilis brothers in Edward Street and in 1910, he went to work at Stathi Macree’s Oyster Saloon in Townsville.

Between 1911 and 1919, he lived and worked with his brother Emmanouil in the Stathis Bros Refreshment Rooms in Hay, NSW, providing “fresh fish and oysters twice a week.”

In 1920, Peter moved to Canowindra and operated a fruit and confectionary shop or what was known as “refreshment rooms,” firstly with Nicholas Calocherry, then on his own.

He married Stamatina “Bylos” Chlentzos in 1921 and they began their family with son George in 1922 and daughter Irene two years later in 1924. They lived in rooms above the shop.

In April 1926, a fire completely destroyed the building owned by Mr T Callan that housed the Stathis’ shop and three others – a tailor, stock and station agent and a hairdresser. In 1927, they were back in business, operating the Garden of Roses cafe which is still running today. Daughter Eleni and youngest son Peter were born in 1927 and 1929 respectively.

What is known about the Stathis Cup: Many newspaper items from the local newspapers in the Cowra and Canowindra area mention rugby league teams in the Boree Shire, playing for the Stathis Cup. Towns mentioned include Grenfell, Woodstock, Lyndhurst, Cudal, Mandurama and Canowindra. The newspaper reports date from 1925 to 1936. It is assumed that the cup was likely to have been donated by Peter Stathis as way of marketing his business.

There is evidence that a number of other Greek business people in that part of NSW, also had rugby league competitions named after them. The Stathis Cup competition may have included money to help pay for uniforms, fees or maintenance of grounds.

References to the Stathis Cup can be found in three newspapers through Trove online: in 1925 and 1936 in the Cowra Free Press and in 1936 in the Carcoar Chronicle.

The descendants of Peter Stathis would be very interested in discovering the whereabouts of the cup, if it exists. Photographs of winning teams from the time with the cup would also be fascinating to see. Perhaps someone from the area can help with recollections or information.

If anyone can provide any information please contact John Minchin on 0418 316 034. John can also be reached via email at johnminchin53@gmail.com