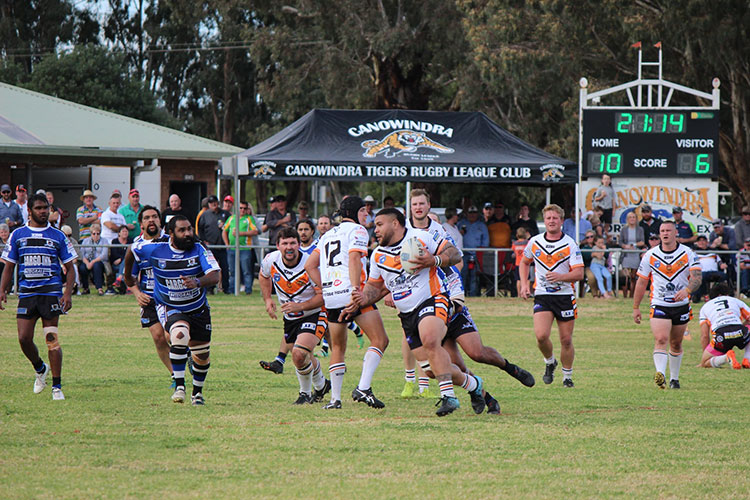 Only one week after the Balloon Challenge, our town was once again awash with visitors as the Canowindra Tigers Rugby League Club celebrated 100 years of play last weekend. The reunion weekend saw hundreds of players, coaches, fans and family members return to their beloved home ground.

The weekend kicked off with a meet and greet at the Bowling Club on Friday night, where players from the 1950s to now, gathered to catch up, with Dick Marsh at age 93 and Bobby Rice, Kenny Thurtell and Bob Grimshaw all in their 80s, representing the 1960 premiership winning side. Royce Simmons, Tigers player of the year for 1978 and long serving Penrith Panthers player attended, along with first grade St George Dragons player Peter Fitzgerald and junior Dragons player Trevor Simpson. Members from the 1979, 1986 and 1995 premiership teams were also in attendance.

The next day saw the current teams play Cargo at Tom Clyburn Oval. First grade and youth league both took the win at 56-16 and 32-6 respectively. League tag went down to Cargo 26-10. A jumper presentation followed, with legendary former player presenting first grade with their 2021 jumpers.

“Rugby league in Canowindra has always been strong,” said Ian Breen. “From 1920 on it was a wealthy township with the river flats and the chaff mills. A lot of those young men worked on the chaff mills all through the summer, then they worked on the rabbits all through the winter, so they were very strong and fit. There was not a lot to do in town, so football was king.”

Some of the most anticipated stories involved the Jack Hore cup, which made an appearance at the event under the watchful eye of Chris from the Canowindra Historical Society. The mythology of the cup persisted, but Ian shared the true story of how the Tigers retained the cup.

“We used to play for the Jack Hore cup which was very competitive. They played bigger towns like Cootamundra and Junee. I believe there were 53 people who told me they played in the last Jack Hore cup, though there are only 13 per side and some of those who claimed it are younger than me!” Ian laughed. “It was actually won on a forfeit. We could not field a team as we had injured players and the Cumnock side could not field a team either, so the Tigers committee men, half a dozen older blokes, went along and stripped off and pretended they were going to play. They could not have done it anyway as they were too old and decrepit, but because Cumnock could not field a side they had to forfeit. We won the Jack Hore cup on a forfeit and we have owned it ever since.”

Ian said the shared mythology of the club went a long way in making the reunion such a success, with visitors still calling to say how much they enjoyed it.

“We scored more tries on Friday and Saturday night than we ever did on the football field. There were some tall tales. Apparently, someone could pass a ball faster than it could be kicked! It was a very successful weekend,” Ian finished.