Home » The Kings Of Country Return To Australia 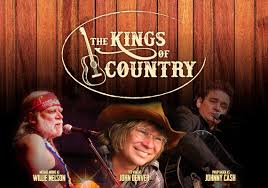 Direct from the USA and after sell out shows in North America, Abstract Entertainment is proud to announce the return of The Kings of Country tour – playing at Dubbo Regional Theatre on Wednesday 29th May 2019 bringing back the music of Johnny Cash, Willie Nelson and John Denver.

Phillip Bauer as Johnny Cash has been recreating the sound and the look since 1985. This with Phillip’s uncanny natural resemblance and his stage presence leaves his audiences spellbound as he recreates the era of Jackson, Folsom Prison Blues and all the songs that made Johnny Cash the King of Country music.

Michael Moore as the outlaw Willie Nelson is the World’s leading Willie Tribute artist. Identifying with his music and style from an early age, Michael developed an affinity with Willie that has led to a lifelong career as a tribute performer and has seen him travel the world performing songs such as On The Road Again, Always On My Mind and To All The Girls I’ve Loved Before.

Ted Vigil as John Denver has just been awarded the Rising legend award by the American Country Music Association. He is an accomplished drummer and singer but has made a career performing as John Denver. He has been asked to perform at John Denver’s own Windstar Foundation on two occasions – a unique honour for the Denver fan and tribute artist. Audiences will hear the songs we most remember – Take Me Home, Country Road, Annie’s Song, Thank God I’m A Country Boy and so many more.

The Kings of Country show is a unique opportunity to experience the music of three amazing artists in one night. For tickets head to www.abstractentertainment.net