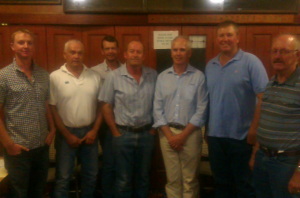 Steward, Sam Stranger thanked the judges Frank McCrae (Auswest Seeds, Forbes), Tim Wright (Ag N Vet, Eugowra) and Barry Unger (Stoller Aust) for their time.  He also thanked Frank McCrae for writing up the report and giving valuable feedback to growers.  The main point the judges made in the report was that they identified 2 main issues facing growers: Increase in herbicide resistance and rising costs of production.

Sam also thanked the sponsor Paul Morrison and Jess Bensley, Rabo Bank for their sponsorship and for driving the judges around on the day.