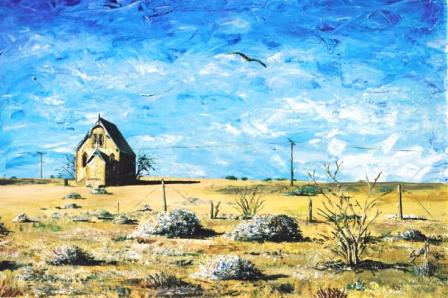 Canowindra is about to make its mark as a regional cultural hub this October with a major art exhibition, staged alongside the
second Baroquefest concerts and showcasing the highly rated creative skills, dedication, sophistication and depth of some of
our finest local and regional painters. Labelled “The Artful 8,” the exhibition will feature the vibrantly diverse genres of our leading artists, including Heather Vallance, David Isbester, Derek Maitland, Virginia Mooney and Sue Hodge, along with Ann
Morton of Cowra, Isabella Mathieu from Cargo and Carcoar’s Jan Platt.

You’ll find their works staged in the Old IGA Store, Gaskill Street from October 9 to 22, and open daily throughout the fortnight. The artists themselves will be on hand at times during the exhibition to chat with visitors about their work and art in general. Some will have their own studios open to visitors during the event to launch an official Canowindra Arts Trail.

While the “Artful 8” is a two-week event its ceremonial opening , to be held at 5.30pm on Friday October 17, will also mark the official
launch of this year’s Canowindra Baroquefest, with the first concert featuring Camerata Antiqua at 7.30pm in All Saints Church.
The art exhibition is aimed not just at showing off its best artists and their works but also developing the Canowindra region’s
artistic talents in an ambitious program to establish it as a cultural centre and major player in Central Western arts tourism.

As Arthur Falconer, Canowindra community stalwart and head of the newly formed Canowindra Arts group organising “Artful 8” explains: “We’re planning to make this the first step in a campaign to broaden local arts throughout the community and beyond – establishing a Canowindra permanent Arts Centre in which all residents of the town and its surrounding villages will be able to develop and exhibit their creative skills.

“The centre would also promote the whole range of artistic pursuits including photography, art printing, sculpture, ceramicists, art weaving, also poets and writers, providing them with a venue and the resources they’d need to advance their talents. “We also plan regular workshops by established artists which would help beginners – adults, and especially schoolkids – explore and develop their creativity.”

The “Artful 8” show will in fact be the centrepiece of a virtual Canowindra arts festival alongside the Baroquefest 2016 concerts,
with featured artists also exhibiting their work at their own personal galleries. Heather Vallance, for instance, has a major display of her paintings on permanent display at Finns cafe and store on Gaskill Street. David Isbester’s Gaskill Street studio and gallery will also be open, as will artist-designer Melissa Gersbach’s gallery and store a few doors away. Melissa Barber will also be staging an exhibition
at her former gallery next door to Trading Post on Ferguson Street.

Says Arthur Falconer: “Locals and visitors will see the true scope and astonishingly high quality of art in Canowindra and the surrounding region. “Hopefully ‘Artful 8’ will help establish the base for a permanent showcase and training ground for local artistic expression for years to come.”