The preliminary games for the Ladies Open and the Ladies Masters – Monday 9th June.

In the ladies final Amber was victorious with a final score of 79-40. Tina won the Ladies Master’s final with minutes to go and came up with a well-earned win of 70-62.

The Men’s Masters was a straight Final against Bill Paul and David Bigg. Bill’s years of experience proved too good for David and Bill had a convincing win 88-47. The open graded preliminary games were played on Thursday 12th June. The D-Grade competitors, Max Wensley, Mitchell Stanley, Monique Jenart and Kassie Wythes all played each other to determine the final. The boys were too strong for the girls this year and the final was fought out between Max and Mitchell. Max def Mitchell 70-68. Mitchell played a more controlled game 2nd time around and came up with a win against Max 66-63.

C Grade competitors were Kayla Palmer, Roxanne Breen, Sandy McDonald and Jackie Watson. Roxanne came away with a win against Kayla and the final score was 79-58.

B Grade was mixed with both men and ladies. Helen McSpadden, Ken Stanley, David Bigg, Wendy Bowman and Jason Lowe made up the B grade players. Some of the results of these games were:Helen 61 def Jason 60, Wendy 62 def Ken 61, Helen 68 def David 54 and Jason 62 def 47. From these games the Final was determined and the ladies were too good for the men with the final being between Helen and Wendy. Like always Helen played a great service game but Wendy’s fitness and agility got her over the line and she had a win 68-55.

The A Grade Open saw some really entertaining and skillful games being played. Scott Bennett, Mark Adams, Amber Meurs, Troy Loud, Oliver Wythes and Jonno Preston made up the open grade. Results from preliminary games were: Amber 58 def Troy 52, Oliver 77 def Jonno 43, Mark 52 def Oliver 43, Scott 77 def Amber 52. Once again the Open Final was contested by Scott and Mark. Mark’s determination, will power and very annoying but extraordinary serves kept him in the game. Scott had a victory 54-42 against Mark in this very entertaining Final.

The Squash Club would like to thank our sponsors– Charles Curran (Nassau Estate), Mark and Anne Ward (Swinging Bridge Wines), Canowindra Bowling Club, Mark Adams (MJA Cattle Scan) and The Canowindra Trading Post. Also a big thank you goes out to everyone who was involved with the running of the Championships. 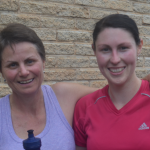 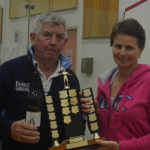 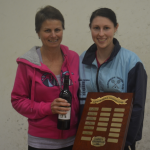 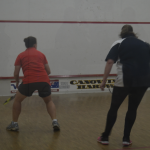 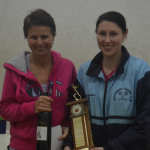 The new Clubperson of the Year Amber Meurs with Wendy Bowman 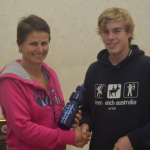 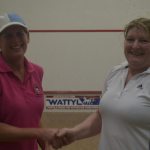 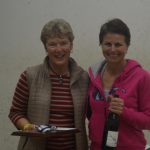 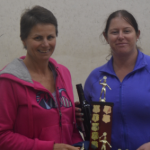 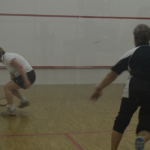 Roxanne Breen and Sandy Mcdonald in a tough battle 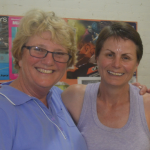