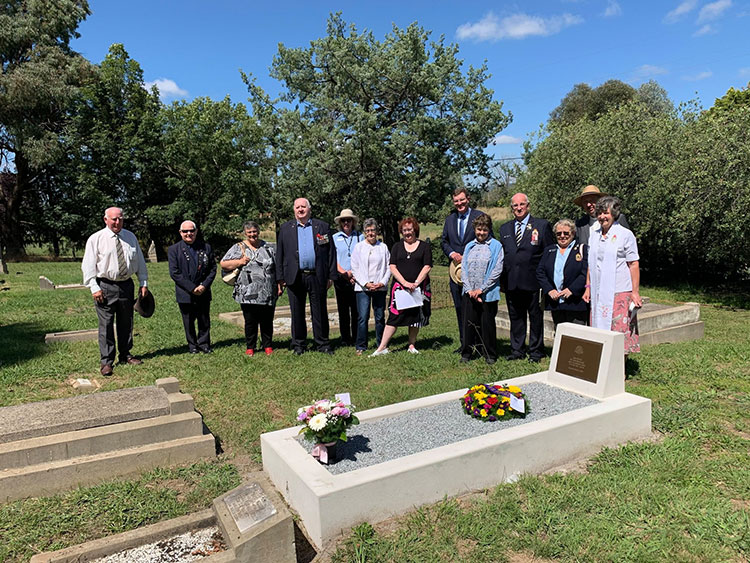 A World War I digger finally received a name for his gravestone in Orange last week. Private William Wrangham was born in Northern England and arrived in Australia in 1886, where he lived in Western Australia before he enlisted in the Australian Defence Forces in late 1915, serving in England and France.

Not a lot is known about the life of Private Wrangham, who it is believed moved to Orange after being medically discharged in April 1918, having been wounded and gassed. William remained a bachelor for the length of his life and had few connections with anyone in Orange. He passed away at Orange Base Hospital on 17 May 1921. While the Returned Soldiers Club of Orange organised a funeral for Private Wrangham upon his death, his grave was never officially marked.

After 99 years, thanks to local historian Sharon Jameson of the Orange Family History Group, with the help of the Commonwealth War Graves Commission, Private Wrangham was given a marked grave befit-ting of an ANZAC digger. It was the chance discovery of a 98 year old newspaper which would lead to the resolution of this mystery. The paper noted the burial of Private Wrangham in 1921, which was enough to pique Sharon’s interest. Sharon sought out Private Wrangham’s grave and turned up nothing. She was not deterred and, like any good detective, soon worked out that he had been buried in an unmarked grave near Lone Pine Avenue in Orange.

Sharon worked for many months to prove that her conclusion was correct, lobbying the Australian War Graves Commission for a headstone worthy of Private Wrangham’s service. The headstone was laid in December 2020 and a service of commemoration was held at his grave last week with his family descendent Elizabeth Raynolds, Sharon Jameson, members of the Orange RSL Sub-Branch and the Orange Family History Group in attendance.