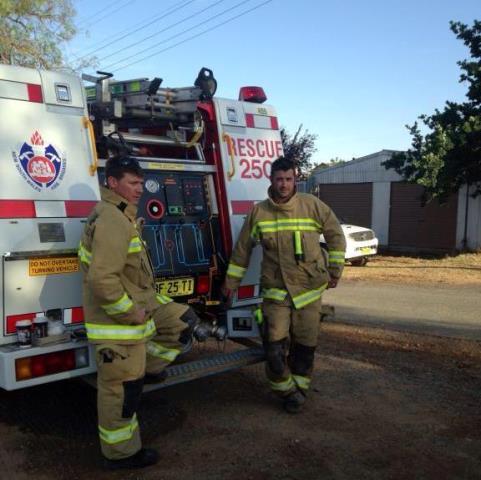 A 40 year old man has been charged after a deliberate fire was lit at a house on Charlotte Street, Canowindra. Shortly before 1am on Friday morning, neighbours were alerted by smoke, flames and the smashing of glass. Mary Finn was quick to act, phoning triple 0 immediately, “we were terrified he was still in there” she said. The man, who cannot be named for legal reasons, allegedly set fire to the house then proceeded to walk 14kms out of town along the Mandurama Road before he was apprehended by the police at 8.30am. He was then taken to Cowra Police Station and later charged with damage to property by fire. The man has been refused bail. The emergency services were quick to respond and should be commended on their efforts at the scene. Police urge anyone with information in relation to this incident to call Crime Stoppers on 1800 33 000.
By Rhi Quinn

caption: David and Grant, two of the firemen who helped battle the flames