Home » Surfs Up at Canowindra 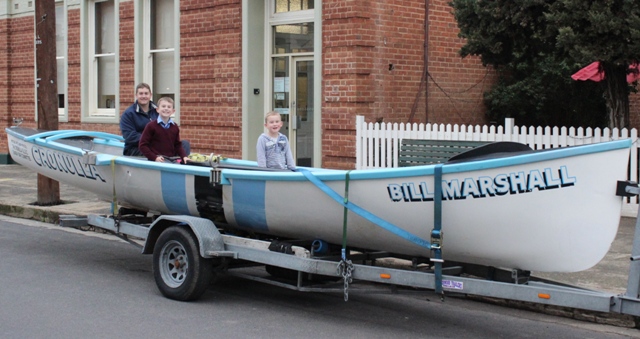 For those of you that have noticed and wondered why a Cronulla surfboat has been around the streets of Canowindra recently, it’s not because someone took a wrong turn and is seriously lost!

It’s because Canowindra now has its very own surfboat! Canowindra resident Matt Rice who used to race in this exact boat has been given it by Cronulla and plans to teach anyone interested in learning how to row. “I think it’s a great opportunity that country people normally would never be able to do,” Matt said. “Rowing is a fantastic sport involving nearly all the muscles in the body. It requires mental focus and can build lifelong friendships.”

The plan is to learn the technique on the rowing machine first at Matt’s gym then take the boat to Lake Canobolas and everyone can have a go, followed by a picnic. He plans to introduce the surfboat to the Bush Nippers in Orange in summer and jokes about rowing it down the Belubula River when it’s in flood. Cronulla Surf Club has extended an invitation stating that if any team becomes competent at rowing, they would be delighted to take that team out in the surf and crack a real wave.

“So there’s the challenge! Some at Cronulla were hesitant at giving me the boat,” said Matt. Matt has competed at world championships, won a state gold and silver medal, won three Sydney branch championships and one metropolitan gold medal all in this very boat, proving she’s no slug! “Normally you have to be 16 years or older to start learning how to row the surfboat,” says Matt, “but here in Canowindra, Lake Canobolas and Wyangala Dam we can teach anyone, even kids!”

Anyone interested in joining Canowindra’s first ever surfboat team, call Matt Rice on 0458 787 822.