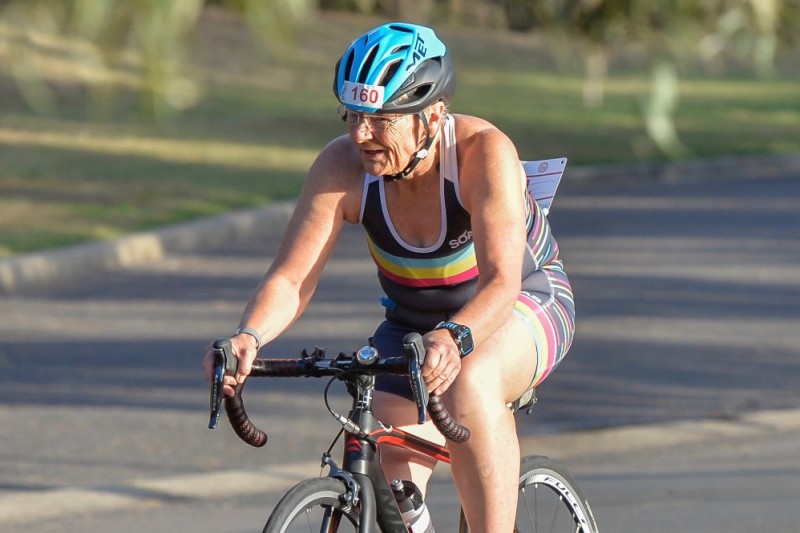 Local lady Sally Wallace is currently in training for the World Triathlon Championships. The event, which will be held on an island off the coast of Mexico in September, has a World Age Group category of 65-69 which Sally will be competing in.

It all began when Sally came back from a bike ride in Vietnam and took up running in 2013. She decided to try a triathlon after being prompted by her sons. This year alone Sally entered four races that were qualifiers for her age group and won three of them. “It’s great cause there’s not much competition!” said Sally, who is balancing training between a full time job. “It’s addictive, once you start doing a bit of training you get restless if you’re not doing something.”

Sally is supported by Barnyard coach Dan Benton and the Cowra Tri Club, who have two other members also heading to Mexico. There is, however, one catch to competing at the World Triathlon Championships, Sally has to pay for everything other than a shirt and shorts which are supplied. “It’s going to cost around $10,000 to get there, pay for bike shipment, doctors examination and everything else. Nick Jacobs and Rob Rogan kindly set up a GoFundMe
page to help with the costs. I’m funding most of it but any help along the way would be greatly appreciated.”

Sally will complete a 750m swim, 20km bike ride and a 5km run. When asked about her training, Sally said; “It’s all trial and error as this is new ground for me. Those that get up and give it a go will achieve.” To help Sally get to Mexico, you can donate on www.gofundme.com/27srxss