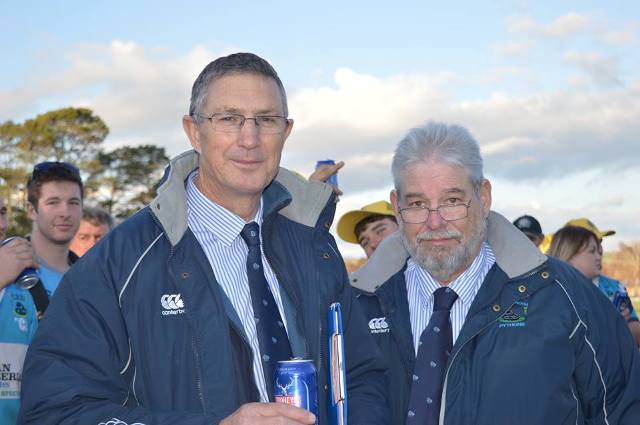 The true spirit of Canowindra was certainly shown on Saturday’s rugby game between the Pythons and the Blayney Rams, as the grandstand was full of supporters.

The Pythons struck early in the game getting down to the line within the first 6 minutes. A big push from Jordan Irvine with the whole team behind him saw a successful offload to Dan Bowd, to ground the ball in the corner of the field. With the first points on the board the Pythons led 5-0.

Jo Keady and Ed Price made some great tackles out wide to ensure the Rams attack didn’t get through. After a number of attempts Blayney finally broke the line to score near the goal post, evening the score 5-5. Ed Price made a great break down the sideline but was taken out by two Rams defence 5 metres out. The Pythons couldn’t keep up with the Rams speed as they found a gap and ran with it scoring their second try of the game.

Clayton Maynard made some strong tackles and kept the teams heads high with lots of talk. The Rams were on a roll though as they were able to break through the defence again to get another try in before half time making the score 15-5.

Throughout the game Luke Watt continually put pressure on the goal kicker making the conversions not successful. Adam Grant had a great game as he led the forward pack and Ronald Lawrence made some great hit ups as he was strong defence. 3 minutes into the second half Blayney came out strong to secure another try getting in front 15 points. Ed Price finally made it over the line to make the score 10-20.

The Pythons weren’t giving up as Luke Watt sprinted 70metres to score in the corner of the field. Behind by only 5 points the crowd was roaring for a Pythons come back. A number of Pythons players’ copped injuries throughout the game, which saw them starting to struggle against Blayney who were a very fit team. Blayney got 2 more tries in before fulltime making the final score
32-15.

The Pythons did an outstanding job to come from 5th to take on the minor Premiers the Blayney Rams. Sean Wyburn has done a great job captaining this year and the true spirit of the game was certainly shown in these last few games. Good luck next year Pythons!