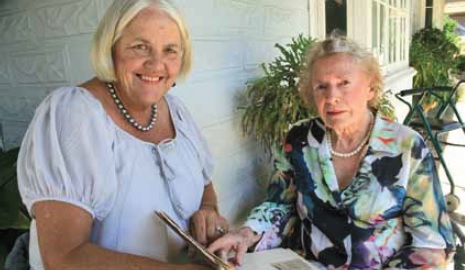 As the production team for the movie “Strangerland” was surveying downtown Canowindra locations this week, the most fascinating coincidences emerged linking our town with the movie and one of its three stars, Nicole Kidman.

First, who would have thought that Nicole has a connection to Canowindra’s founding Finn and Grant families?

Well she has, according to a family tree drawn up by 92-year-old Berna Wright, granddaughter of T.J. Finn and cousin of Canowindra resident Anne Ward.

And this is how it goes: Nicole Kidman’s great great great grandparents were John and Mary Finn from Tralee in County Kerry who settled in Hartley in 1839.

And all these family links make Nicole the fourth cousin of Richard Payten, the “Strangerland” executive producer, who is also in fact the brother of Anne Ward.

According to the family, Nicole herself is intrigued with the complex family links and may well visit Berna during the “Strangerland” filming.

As for the shoot itself, we now have an initial schedule. Location manager Colin McDougall has announced plans to film sequences in Gaskill Street from April 4-11 during which the street will be closed to traffic at various times.

Meanwhile, there’s been another location scout, Richard Montgomery of What Ya Need Film Services, in Canowindra over the past week surveying for yet another movie that may be set here.

Richard’s keeping this one tightly under wraps — all that’s known is that it could have an historical setting, and that Carcoar is being considered for locations as well.