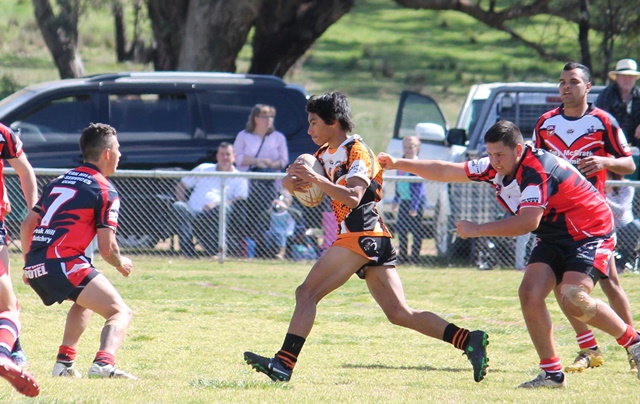 The Canowindra Tigers Youth League players were driven by determination and had a strong start, although unfortunately were defeated by Peak Hill in the Major Semi Final 38 – 12. Jayden Brown started off the game with a 40/20 kick landing Canowindra in prime position as he then chipped and chased his way under the posts within the first few minutes of the game. It didn’t take long for Peak Hill to come biting back as they were able to score three tries in the first half. Luckily on the half time buzzer it was Ebann Malae who was able to score a try to Canowindra down the sideline with Jayden Brown adding the extras bringing the half time score to 18 – 12. At this point the Tigers were slightly confident that they may had been able to win as this was the closest score they have had this season against Peak Hill although unfortunately the second half of the game was dominated by the Peak Hill Roosters. Canowindra started off well although unfortunately lacked in defence in the second half as they couldn’t hold out and push themselves through to the Grand Final. With no reserve players the boys were absolutely exhausted after pre game nerves and such a big first half, they couldn’t find the inner strength to pick themselves back up again. Great work to all of the players who had no choice but to put all that they had into this game. The Canowindra Tigers Youth League team were struggling to get enough players at the start of the season and many of the players had never played with each other before. They have improved so much and have made it further in the competition than they originally thought they would. The players have utmost respect for their Coach Brett Traves as it was his first year in coaching these boys and he has really taken the time to help the players on and off the field which is a very important connection for a coach to have with his players. Fantastic season to the Canowindra Tigers Youth League players!