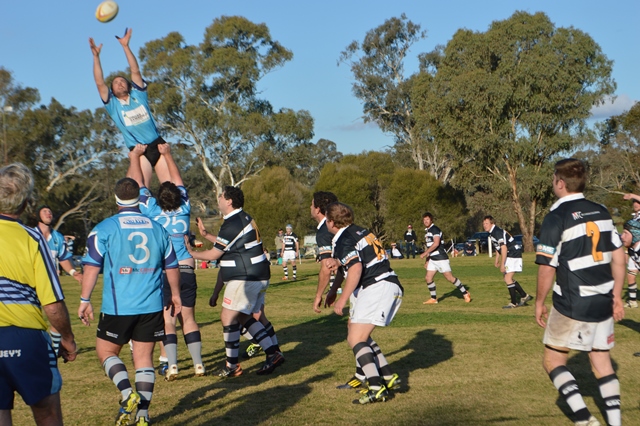 Canowindra Pythons Take On Their Arch Rivals and Win.

Saturday kicked off with the Wali Rugby which saw the Pythons take on the Cudal Cobras. Some great tries were made by Frazer Wythes, Lachlan Rice and Sam Breen but in the end the Pythons where defeated 5­3.

The next game saw the old boys dust off their boots to play against each other all wearing Bens number 8. What was a friendly game soon turned competitive as the boys enjoyed getting a good tackle on one another. The old boys Red team came away with the win 10­5 although all were happy to be playing again in remembrance of a good mate. Anthony Harrison and David Chase where both awarded with best and fairest which made them remember their younger days.

The main game took place afterwards which saw the Canowindra Pythons take on the Molong Magpies. “This would be one of the best games the Pythons have played for a while as everyone really played like a team”, Graham Rice Manager and former Coach said.

Dan Bowd was first to make it over the line for the Pythons but was closely followed by two successful penalty kicks by Molong to make the score 6­5. The Pythons all worked together to secure another try as Craig Mckenzie pushed through defense. This made the score 12­6 after Ben Schaefer successfully converted. Some great work in the front row with Jacob Baker and Dean Schaefer making some strong tackles kept Molong out until half time.

Molong came back fighting hard in the second half and scored. The Pythons weren’t giving up either as Luke Watt worked hard to put the Pythons back in their attacking half. Sean Wyburn then scored next to the post getting the Pythons back in front 17­13 but not for long as Molong were over the line again. With 10 minutes to go tensions where rising in the crowd. A penalty was then awarded with Ben Schaefer converting and it wasn’t long before Ben Easter palmed off defense to score the winning try for the Pythons making the final score 27­18.

3 points and players player went to Luke Watt, 2 points to Ben Easter and 1 point each to Jacob Baker and Dean Schaefer.