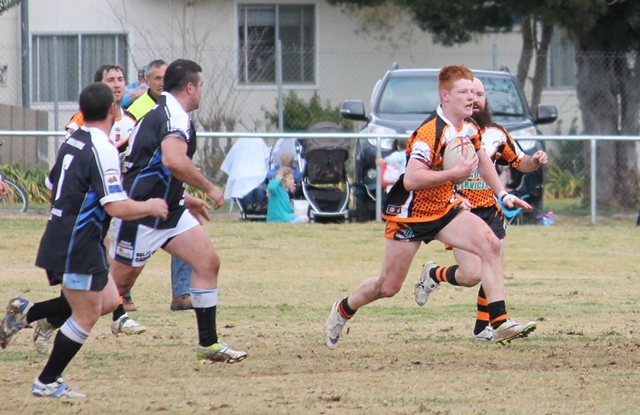 Another very intense game was held between Canowindra and Cargo on Sunday and unfortunately the Heelers were in better favour as Canowindra was defeated 24 – 18. Only one try marked the difference between final points, showing how tight this game was. With some ruling decisions setting the Tigers back, they had to fight even harder throughout the game. Their defence skills were on show in the second half as for the first 10 minutes there were only 11 players on the field, and Cargo were still unable to break through Canowindra’s smaller defence line. Great work to Matt Mclean who was able to score the first try of the day. Matt kicked a perfect 40/20 and he also topped tackles with a high 32. Notable mention to Kain and Aaron Earsman for their great ball control as they made some damaging breaks through Cargo, along with their full back Nick Willson. This week’s Players Player went to one of the younger players Curtis Hughes for his outstanding performance on the day. Curtis was straight up to the Cargo players sending them backwards every time they attempted to reach the try line. His defence and attacking skills were flawless. Great work to Jayden Brown and Darren Nurcombe for also scoring a try each. An unfortunate loss as the Tigers couldn’t conform to put any more points on the board after a disallowed try got them down, they struggled to lift themselves back up to roar through the Heelers. The Tigers are now preparing through training this week to hope for a win against Peak Hill as the stakes for Grand Final are high. The next couple of weeks will determine who will be entering the Grand Final and Canowindra will be fighting for prime position. Best of luck Canowindra Tigers First Grade.