Home » Spirit Of The ANZAC Lives On 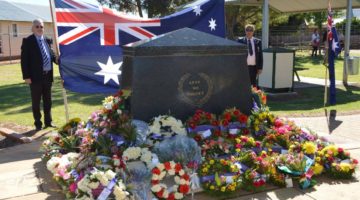 With extra crowds in town for the Balloon Challenge Week, the Anzac Day commemoration in Canowindra on next Wednesday 25th April is expected to be one of the biggest on record.

Record numbers attended ceremonies at the Australian War Memorial on Anzac Day last year, with over 38,000 at the Dawn Service and another 7,000 attending the National Ceremony and March.

Anzac Day goes beyond the anniversary of the landing on Gallipoli in 1915. It is the day on which we remember all Australians who served and died in war and on operational service past and present. The spirit of Anzac, with its qualities of courage, mateship, and sacrifice, continues to have meaning and relevance for our sense of national identity.

Today we mark the occasion with national remembrance. Commemorative services take place throughout Australia at dawn to represent the original time of landing of the soldiers.

In Canowindra this year the Dawn service will be held at 6am in Memorial Park. Later in the day around 10.30am a commemorative march will be held down Gaskill St before the main service begins at 11am.

This year the guest speaker is WGCDR Peter Hall AM who has family in Canowindra. Peter Hall AM has been in the RAAF for 40 years now and has many interesting stories to share of his service to Australia.

This Friday 20th April the RSL Sub Branch will be selling merchandise outside IGA from 9am to raise money for the Invictus Games to be held in Sydney from the 20- 27th October 2018. On a trip to the Warrior Games in the USA in 2013, Prince Harry saw first hand how the power of sport can help physically, psychologically and socially to those servicemen and women suffering from injuries and illness and so the Invictus Games were born.