Home » Snippets from the Town of Nathgari

The filming is now over but many locals will remember the week Nicole Kidman, Hugo Weaving and Joseph Fiennes graced our very streets. Everyone seemed to find the filming a great catalyst for publicity, for the local economy and tourism, with people from all over the world talking about our ‘remote outback town in Australia’.

“It was great for the town, it really has put us on the map and I think that out of all the towns in Australia we were one of the lucky ones chosen, absolutely fantastic”, Johnny Lawrence boasted. 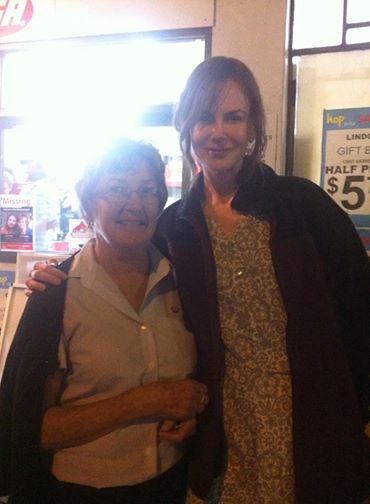 Tommy Jeffs was thrilled to see Hugo Weaving walk into his Deli and serve him coffee. Jackie Yeo got her 5 minutes of fame on the hit show on Southern Cross Ten ‘The Project’ – even though she managed to pronounce Hugo Weaving’s name wrong she is still a star in our eyes. Oh and by the way she has a brand new album coming out ‘Spanish Breakfast’ by Jackie Yo!

Dot Cain was lucky enough to score an extras part and was overwhelmed with how lovely everyone was. “Everyone was great, we all made some great friends and it was like one big family, I enjoyed every minute”.

Nearly everyone in Canowindra was involved somehow and it was truly a memorable week.

This is also not the first movie to be filmed here; Canowindra has had many brushes with fame, and might have to start ‘Canowindra’s Walk of Fame’.