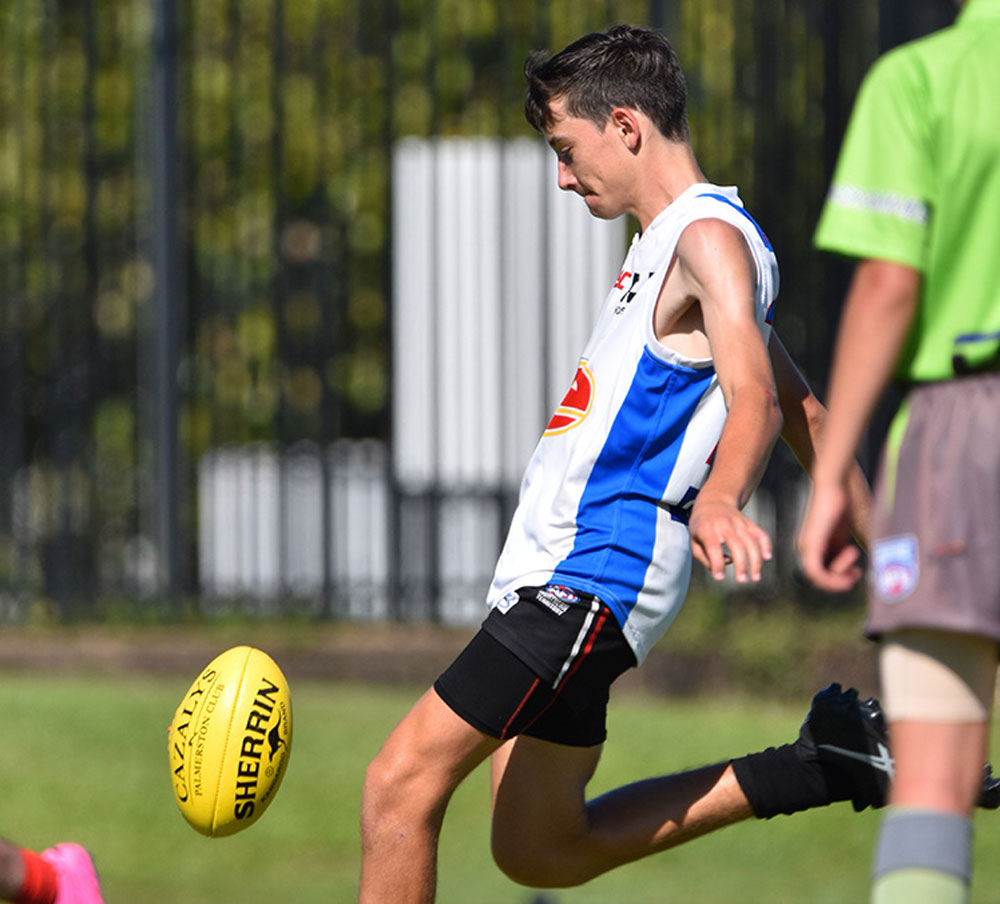 Hayden Breen in action at the Michael Long Cup May 1, 2021 (Photo courtesy of AFLNT Media).

Breen to make his debut in U17 NAB cup – TIO Darwin

John and Mary Chittick’s eldest grandson Hayden Breen has capped a successful 20/21 NTFL season by this weekend running out as part of the NAB AFL U17 Championships in Darwin.

Hayden played as a key defender for his U16s Southern Districts Crocs team, rounding out his season with club awards for Best Defender and Best and Fairest.

Along with his teammates, Hayden competed in the Michael Long Cup in a show-case of the best U14 and U15 talent from the Territory, held in Darwin on May 1. As a result, Hayden along with five teammates were then invited to train with the Cazaly’s NT Thunder Academy U17 squad.

Originally scheduled for June and playing against interstate teams the Cazaly’s NT Thunder Academy sides run out under lights this weekend. The NAB AFL Championships represents the highest level of representative football for boys aged 17 and under. This weekend’s match will be broadcast live on AFLNT YouTube channel.

Hayden is next looking forward to his club football season kicking off in October, once again running out for Southern Districts Crocs.

The Village Enhancement Fund Policy is set to be adopted by Cabonne Council at their meeting next Tuesday. Canowindra Business Chamber and Progress Association will be allocated close to $20,000 a year for the development and implementation of community plans and priority projects.

Cabonne Council’s General Manager Brad Byrnes said the policy has been introduced to support the activities of shire progress associations. “These groups, such as the Canowindra Business Chamber and Progress Association, are important in assisting in prioritising Council projects, as well as driving and delivering their own initiatives across their communities,” he said.

“The allocated funding is to be primarily spent on Council property/assets and, if not, must be for well-demonstrated community benefit at a minimum.” Write to Council outlining the project and funds required, with an appropriate acquittals process if you’ve got a project to be considered. Unspent funds may be carried over more than one financial year, up to a term of Council.

“This streamlined application process has been introduced to ensure the funds are as easily accessible to the community as possible, as well as to encourage more people to come forward and support these community groups in the work they do,” Mr Byrnes said.