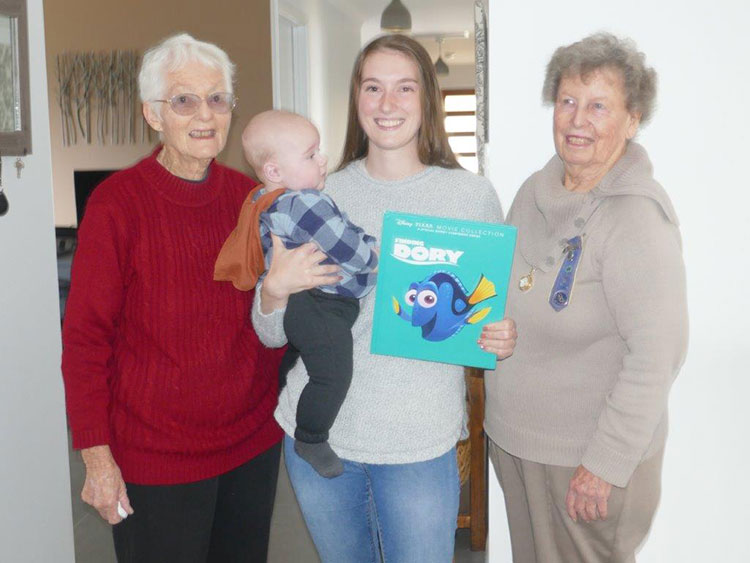 Keeping Up With the Eugowra CWA: CWA Eugowra Branch members travelled to Canowindra to celebrate the Canowindra Branch’s 97th birthday last month. The Old Vic Inn supplied dinner and a celebratory cake was cut and speeches made. An enjoyable night was had by all.
Eugowra members also assisted with Australia’s Biggest Morning Tea at the home of Don and Joan Herbert.
In other news, Ruth Nielsen and Jeanette Norris have taken over the reins from Shirley Heinzel and Janet Noble who have retired as Books for Babies officers. Janet started giving out books to Eugowra babies in 2004, assisted by the late Pauline Howell, then Shirley took over. Books are given to parents to encourage them to read to their babies. Reading to children encourages talking and understanding language, imagination, concentration, creativity, listening and problem solving. If you have a new baby, please let Jeanette (6859 2382) or Ruth know.
Janet and Shirley presented their last book to Jimmy and Fiona Park for their baby Clive.
The next meeting of the CWA Eugowra Branch will be Thursday, 9 July at 11am.

Thirty Years of Gardening and Friendship: The Canowindra Garden Club recently had a working bee at the Canowindra Cemetery to prepare to replant the memorial garden around the gazebo, with digging, fertiliser and mulch. A rosemary hedge will be planted and maintained by the Garden Club. Cabonne Council are reconnecting the water to the cemetery with a new water line and tap and installing a drip system for the garden. The Garden Club are also going to paint the posts and seats in the gazebo to make the area more welcoming.
In July, with the hard work over, it will be party time for the Garden Club as they celebrate their 30 year anniversary of friendship through gardening. This event will be a Christmas in July lunch on 21 July at 12pm at the Old Vic Inn in Gaskill Street. It would be fabulous to have as many past members as possible attend and celebrate together. Enquiries and RSVP to Cheryl on 0467 568 052 before 14 July.

Lions Strike Again: The Canowindra Lions, with help from others, have taken down the old clock on Gaskill Street, restored it and painted the pole. They replaced the clock last weekend. Well done to the Lions. 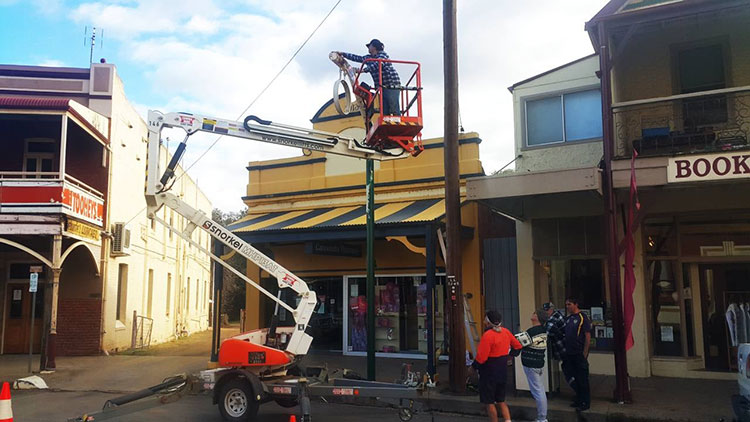 The Lions and others restored the town clock on Gaskill Street. Charlie and Alex Rowston from Cowra Hire donated the scissor lift.