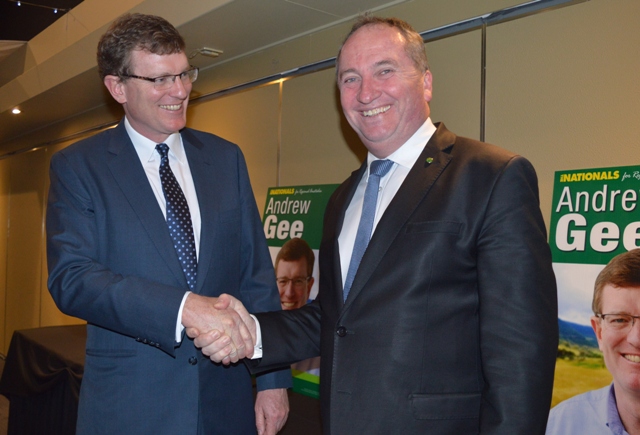 Campaign Launch: The Deputy Prime Minister and Leader of the Nationals, Barnaby Joyce, launched Andrew Gee’s campaign in Orange on Monday 13th June. The dinner was well attended by over 140 people from all around the Central West electorate of Calare, with funds being raised for Mr Gee’s campaign. Tuesday 14th June was officially the first day of the polls so people are now able to vote until the end of the election campaign. Early voting centres are now open and you can find your nearest one by calling 13 23 26. Postal votes can be completed online at www.aec.gov.au or hard copies are available from any Australia Post outlet. Voting in the 2016 federal election is compulsory for all enrolled voters.

Choo Choo! Over the long weekend a steam train powered across the Central West leaving plumes of smoke in its wake. The event, which used a train from the Canberra Railway Museum, ran from Friday to Sunday and travellers were invited to ride behind the largest steam locomotive operating in the Southern Hemisphere- the mighty Garratt 6029. The train departed from Orange Railway Station for a leisurely hour long journey.

Nominations Now Open for Regional Achievement Awards! Get ready to choose a potential winner for the 2015 NSW/ACT Regional Achievement Community Awards, which recognise individuals, businesses and community groups who are making a difference in their communities. Nominations are being sought in the following categories; Community of the Year, Population Under 15,000, Crown Reserve Trust Corporate Manager’s Award, Community Service in Aged Care Award, Employer Excellence in Aged Care Award, Volunteering Award and Events and Tourism Award. To make a nomination go to www.awardsaustralia.com and select NSW/ACT Regional Achievement and Community Awards or call the office on 1300 735 445. Nominations close on Friday, 19th August.

Give Blood This Tuesday: Don’t forget that the Mobile Blood Service will be visiting Canowindra on Tuesday. The Australian Red Cross Blood Service will be based close to Morris Park on Rodd Street from 9.10am to 3.30pm. Everyone who is able to is encouraged to donate as every donation can help save three lives. If you’re planning on giving blood, please drink three to four glasses of water or juice in the hours before you donate and bring along photo ID. To make an appointment please call 13 14 95.