You are here: Home / Articles / Show Girl’s Show Off Their Talents 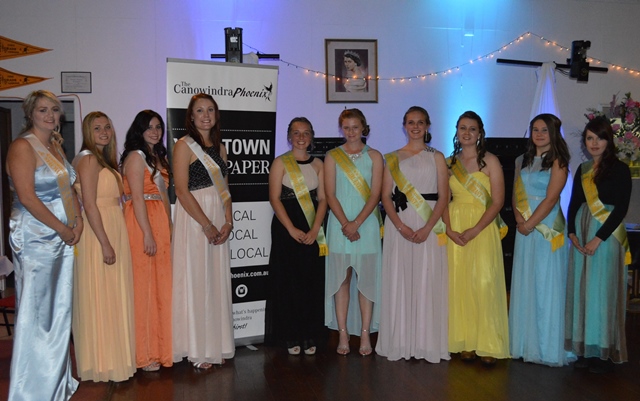 There was a sprinkling of glamour last Saturday at the Canowindra Showgirl Ball as the Canowindra Showgirl entrants dressed to impress. The Bowling Club was buzzing with excitement with over 150 people present to support the talented young ladies. And even though all the contestants looked stunning, the competition isn’t about beauty, it’s about empowering local young women in rural communities.
Kristy White, a previous Showgirl who represented Canowindra, introduced the evening, speaking of her roles and duties performed throughout the year. The Senior and Junior contestants were then awarded their sashes and Cheryl Newsom interviewed the Seniors.
Amy Wythes was first up for questioning. After finishing school, Amy relocated to Queensland as a jillaroo for the Australian Agricultural Company and three years later she has now returned to complete a degree in Animal Science at Wagga University
The second contestant, Ashley Beaton, is 18 and studied agriculture and music at school. After year 12 she began a career in agriculture and works at Moxy’s Dairy. She practises singing in her spare time and hopes to one day have a career as a performer.
Demi Grimshaw, contestant number three, is also 18 and has recently returned from Queensland to live in her hometown of Canowindra. She currently works as a chef in the Canowindra Hotel and isn’t quite sure where she wants to steer her career but is open to the hospitality sector. She may soon be performing some gigs in Canowindra as she is a talented musician as well as a cook
Ellen Blair was the last of the contestants. She is 20 and currently studying music at TAFE whilst working behind the bar at the Canowindra Services Club to support herself. Ellen recently visited America and has caught the travelling bug, wanting to see more of the world in the future.
Two judges were present and the interviews will form part of the overall assessment to choose who will be this year’s Senior Miss Showgirl. The final judging and sashing will take place during the Canowindra Show weekend with the winners receiving a dinner voucher from Kate At 119 Restaurant in Orange and going on to represent Canowindra in the next stage of the competition.
By Rhi Quinn