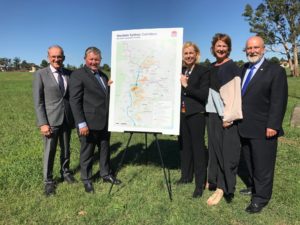 Here are ways to provide feedback:
• Use the interactive online map to see the location of the recommended corridors at www.transport.nsw.gov.au/corridors
• Complete the feedback form at www.transport.nsw.gov.au/corridors/ have-your-say
Cr John Medcalf, Chair of Centroc, is encouraging Councils and communities in Central NSW to have their say. “It is our people, our friends and family who have to traverse these dangerous roads across the mountains and we are therefore really pleased to see a safer alignment up the east face of the escarpment,” said John.

“While there is no good time to advise people that their homes and livelihoods will be affected by a future road upgrade, it is better to know sooner rather than later. Once again I would like to thank the State Government and Minister Melinda Pavey for staying the
course,” said John.

Submissions to the corridor can be made until 1st June.