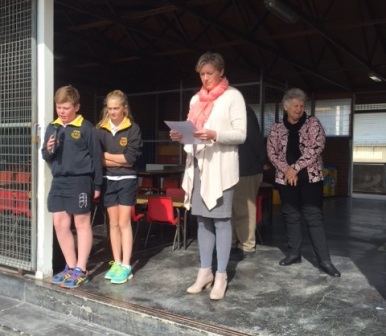 Canowindra Public School held their Open Day in conjunction with Education Week last week and celebrated the long-awaited opening of their new canteen facilities. Between 12 and 1pm, parents and families of students were invited to visit and explore the school, see their children’s work, look on at class rooms in action and chat to the teachers.

Mr Toole and Mrs Berry, who are both planning to retire from teaching this year, were given the honours to officially open the canteen and revealed a plaque noting their involvement. The students were keen to don their chefs’ hats and have already had cooking classes in the new canteen with their class teachers and the garden and kitchen co-ordinator making delicious and healthy snacks like spinach and ricotta pastries.

The new canteen comes in handy for the Breakfast Club too who use it every Tuesday morning to feed hungry bellies. The Peer Support Group are also using the canteen to make pasta using the school’s 5 pasta making machines and will be used by Canowindra Public P&C for the Variety Bash lunch
next week. The school’s new canteen ties into philosophies of self-sustainability starting in the classroom where every class has a bucket.

All food scraps go into these buckets and each day a student takes it to the chook pen. Next to the pen, students are growing vegetables which they will then cook and eat together in the canteen. During the Education Week celebrations, Josie Mitchell was awarded with the Education Week Recognition Award for her outstanding contributions to all aspects of school, including sports, public speaking and academics.