League Tag
Last weekend’s game ended up being playful as Gooloogong didn’t have enough players to compete. The Tigresses decided to split into groups and play for fun and due to the forfeit Canowindra nabbed two points anyway. Everyone had fun and it was good for the Tigresses to practise against their team mates. 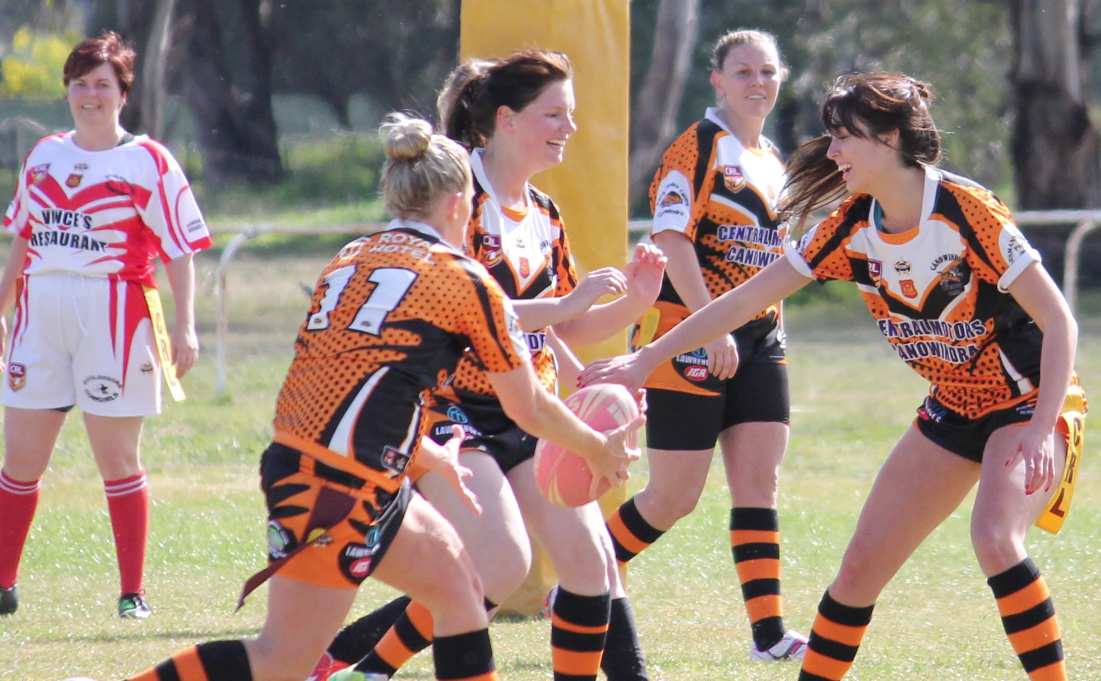 Canowindra Youth Players dominated the Grenfell Goannas at Gooloogong with a win of 34-16. The boys had a strong start which carried throughout the game. Luke Tarrant and Jack Grant scored two fantastic tries each along with Will Middleton and Jayden Brown scoring 1 try each. Jayden Brown’s kicks were spot on for this game as he got 5/6 conversion kicks and also made a perfect 40/20. The team wingers Ebann Malae and Tinei Sauvao had great games and showed improvement in tackling and defence. Players’ player went to Bailey Cain for his outstanding performance on the day. The team now prepare for next week’s tough game against top of the ladder, Peak Hill.

The Canowindra Tigers boys defeated Gooloogong 60-26. It was a great turn out due to the Nugget Cup Memorial that Canowindra are privileged to be a part of. Matt Mclean was at his best, not missing a kick with 10 out of 10 conversions. Good defence by Curtis Hughes and Blake Willson as they refused to let Gooloogong pass. Try scorers were Nick Willson 2, Brydon Hughes 2, Adam Micallef 2, Aaron Earsman 2, Brendan Traves 1 and Jayden Brown 1. Players’ player went to Captain Aaron Earsman for another fantastic game, he is a credit to the team.

This Saturday Canowindra is hosting games for all three grades. League Tag vs Grenfell, Youth League vs Peak Hill and Frist Grade vs Peak Hill. The first game kicks off at 12.30 for the ladies. It’s a big weekend for the Tigresses as they also have a game on Sunday against Cargo at Cargos homeground. Come along to Canowindra on Saturday to help support your local team.

On Sunday the Nugget Cup Trophy was presented to Canowindra League First Grade’s Captain Aaron Earsman. The trophy was donated to the Gooloogong Club by Brad Kennedy whose son Brendan was tragically killed in a car accident. Brad played for Canowindra in his younger years and Brenden played for Gooloogong.  The award was presented in memory of Brendan and his love of the game and will be presented each year from now on at Gooloogong’s home game against Canowindra by Brenden’s Father. The Cup will be on display and the Canowindra service s club until the two club teams meet again at Gooloogong.

Another win for Canowindra at the weekend as they knocked West Wyalong (who wore hula skirts after the match) out of the comp. Ben Schaefer scored the first try then Ed Price and Todd Wyburn scored two more in the second half, with an end result of 22-7. Ben Schaefer kicked 2 conversions and one penalty; 3 points went to Ed Price, 2 points to Ben Schaefer and 1 point to Mick Watt and Luke Watt. Players’ player went to Sean Wyburn. The Pythons now play Grenfell in an elimination final at the weekend. Thanks to everyone who turned up for Members and Ladies Day, it is much appreciated.