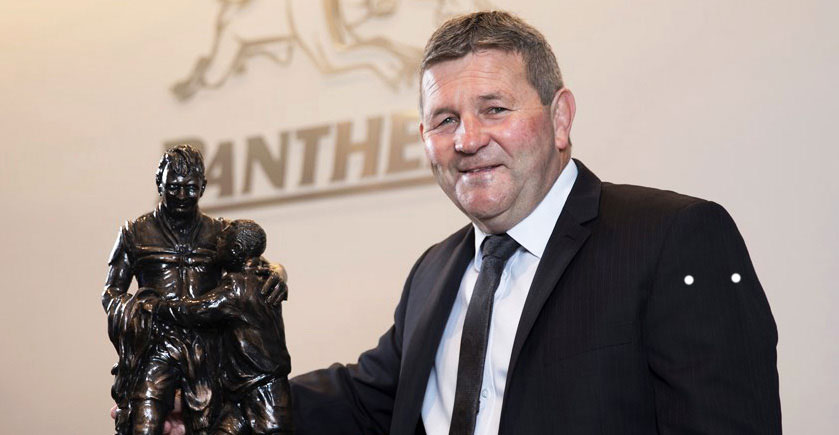 Royce Simmons will walk from Gooloogong on May 17 to BlueBet Stadium in Penrith on May 27 before the Panthers v Cowboys game. Photo courtesy of Penrith Panthers and NRL imagery.

Penrith Panthers’ favourite son Royce Simmons has revealed he has been diagnosed as suffering Alzheimer’s disease at age 61. Typical of the man known as ‘Simmo’, the footy legend wants to use news of his dilemma to enhance the lives of others rather than his own, with a fundraising walk from his hometown of Gooloogong to Penrith in May, coinciding with the Panthers’ home clash with North Queensland.

What matters most to Simmons is shining a light on the impact of the insidious disease, particularly on the loved ones of those who are diagnosed.

He wants to use his plight to bring dementia into the public consciousness and raise much-needed funds for important research into the disease.

And that’s why he and Liane, with the support of Panthers, Dementia Australia and other partners, have organised the inaugural Royce’s Big Walk fundraising event.

Simmons plans to walk almost 300 kilometres from his hometown of Gooloogong to the place in Penrith where his footy dreams were realised, now called BlueBet Stadium.

The walk will depart Gooloogong on Tuesday May 17 and Simmons will cross the finish line ahead of kick-off in the Panthers NRL game against the Cowboys on Friday May 27. The Panthers legend and several high-profile supporters (who will walk with him) will conduct fundraising initiatives and hold events to support junior rugby league along the route.

“I want to help raise money for research as a mark of respect for the medical people who have worked so hard to find a cure,” Royce said.

You can support one of rugby league’s favourite characters and toughest competitors by donating now to Royce’s Big Walk, with more details about the event to be confirmed over the coming weeks.