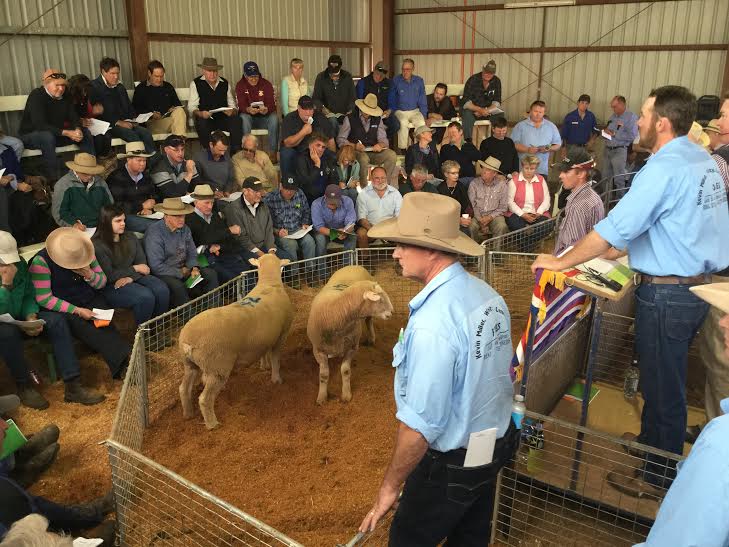 Prime lamb producers showed great confidence in the industry at last
Thursday’s Ridgehaven Poll Dorset ram sale at Cudal, setting an average
price of $1581 for vendors the Legge family.
In the family’s 50th year of Poll Dorset breeding, all 153 rams offered
were sold to a large crowd of 44 registered bidders, with the top price
hitting $3100.
After many received record prices for their sucker lambs over the
last 8 weeks, producers attending the sale were prepared to invest
some of the proceeds from these strong sales back into their operations,
and as a result the average price lifted by $500 from last year’s
result.
Paying the $3100 top price was David Shaw, “Nullgarra”, Tullamore,
for an April 2014 drop son of Tattykeel Marshall.
The heaviest ram in the catalogue at 125 kilograms, it had an eye
muscle area of 33.66cm2 and 8mm of fat.
Mr Shaw also paid the second top price of $3000 for another son
of Tattykeel Marshall, and averaged $2558 for the six rams he purchased
on the day.
David Watt, “Tara Moira”, Trundle, operated at the top end of the
sale but also purchased in bulk, securing 16 rams averaging $2100.Mr
Watt paid to a top of $2700 for a son of Sunnybanks 5/10, weighing
111kg with an EMA of 32.89cm2.
Many regular Ridgehaven clients returned to select new sires, including
Noel Pengilly, Glenleigh Pastoral Company, Eugowra, who put
together a draft of eight rams averaging $2019, topping at $2500.
Trevor Smith, Forbes, paid $2550 for his sole purchase, a 117kg son
of Ridgehaven Fred.
Lindsay Baker, Forbes, took home five rams averaging $1930, while
Robert Norrie, South Bandon Farming, Eugowra, averaged $1713
across the eight rams he purchased.
The sale’s volume buyer was Ray Townsend, “Glenavy”, Eugowra,
who topped up his sire battery with 16 rams averaging $1528.
Robert Cooke, Dilledewong Pastoral, Manildra, picked up 12 rams at
an average of $1533.

Ridgehaven’s Isabele Roberts said the family was very overwhelmed by the support commercial producers showed at the sale. “We were really, really pleased with the quality of the rams we presented this year”, she said.
“Ever since they were lambs, they’ve been a really good group of sheep.
“The comments we got on the day from the buyers were that they were happy to spend that money on rams as they were very happy with the quality of the sheep on offer.”