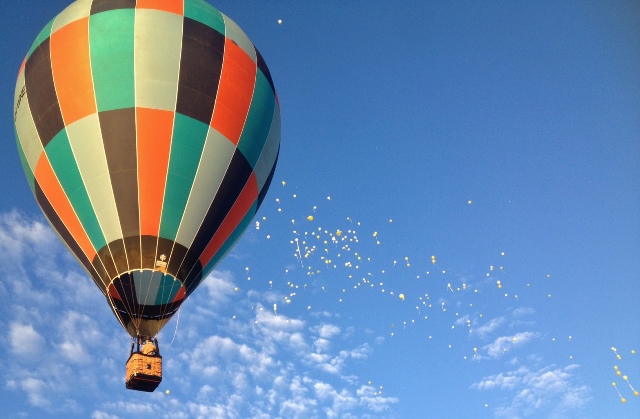 Sunrise on Sunday at the Oval was a sea of yellow as the residents of Canowindra honoured Stephanie Scott. The Canowindra Balloon Challenge committee announced earlier in the week that they wanted to dedicate the launch to Stephanie, who had been an English and drama teacher at Leeton High School. As Reverend Jonathan Williams uttered a prayer hot air balloons decorated with yellow streamers rose into the brightening sky along with hundreds of small, yellow balloons that were released in memory of Stephanie.
The community of Leeton also remembered Stephanie on Saturday as hundreds attended a lunch in Mountford Park. Stephanie’s father, Bob Scott, spoke at the event, saying “our wishes for the future are that you remember her as the girl she was…the tragedy’s happened, we can’t change that. We can’t deal with it any better than we have. But we do know that we had a great girl and we are going to continue to remember her for what she was.”
Stephanie’s story has touched people across Australia with social media campaigns such as #yellowforscotty and #putoutyourdress, showing what an amazing woman she was to people, even those she never met. Brides across the country threaded yellow into their bouquets, their dresses and in other aspects of their weddings on Saturday, which should have been the day Steph married her partner of five years Aaron, to show their support for the Scott family. The communities of Leeton, Canowindra and beyond are united in grief and support for the Scott and Woolley families and in remembering the beautiful Steph.
By Rhi Quinn