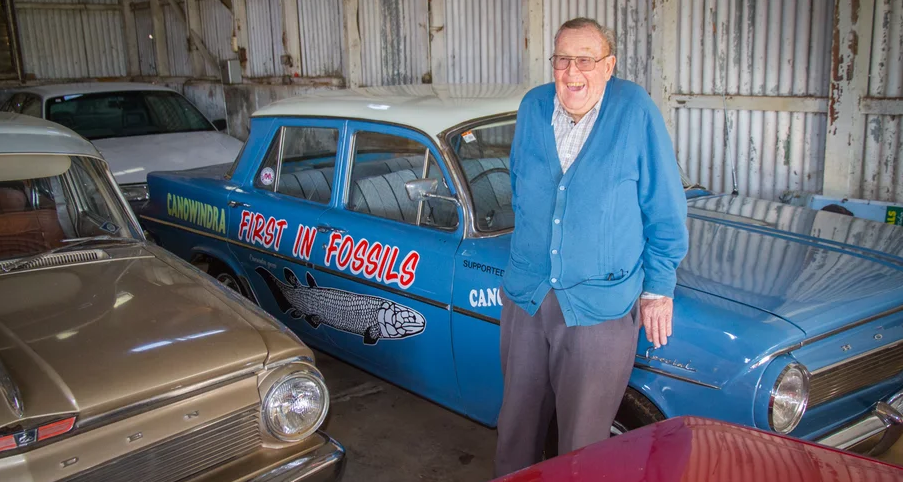 Wilfred Charles Keith McCarron or Charlie as he was better known was born on 23 August 1932 and sadly passed away at Canowindra Soldiers Memorial Hospital last Tuesday 15 August just 7 days shy of his 85th Birthday. Charlie will be remembered for his love and passion for Holdens. In 1955 he started to help his brother John at Canowindra Motors and it was then that Charlie became interested in the motor industry which became his life.

His most important achievement and idea for Canowindra was when Alec Ritchie wanted to dig for fossils and he applied for council assistance. It was rejected by the majority of councillors so Charlie thought about what he could do. Charlie had an EJ Holden that he got painted with a sign “Canowindra First in Fossils” with a big Canowindra Grossi on each side. The councillors had no choice but to allow the dig to go ahead and the results were astounding, producing some of the best fish fossils in the world. Without Charlie’s efforts, the dig may have never happened.

It was only last year that Charlie held a three-day auction showcasing and selling his collection of vintage Holden’s and memorabilia.
Charlie would often pop into the Phoenix Office to say hi or update us on recent happenings around town. Two weeks ago Charlie called in as he was wanting to start the Rotary Club up again in Canowindra. Maybe this could be a part of Charlie’s passing legacy?