You are here: Home / Articles / Rallying for Cystic Fibrosis 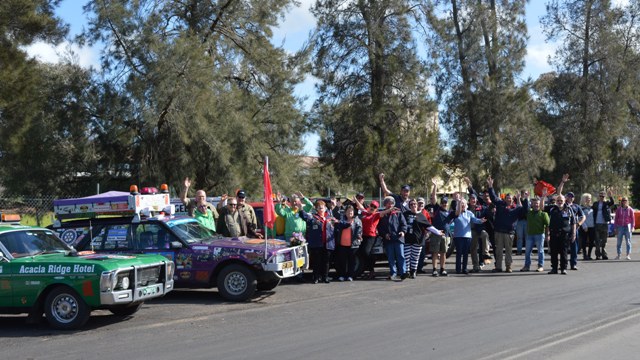 The Great Escape, an off-road car rally that raises money for the research of Cystic Fibrosis, stopped in Canowindra overnight this week.

About 28 vehicles rolled into town on Tuesday night to finish up day two of their adventure after leaving Kiama on the NSW coast that morning. The drivers, who come from all over the country, stayed in a variety of accommodation around town and dined at the Canowindra Services Club before leaving from the Age of Fishes Museum on Wednesday morning.

“It was the best sleep I’ve had in days,” said Koala Jones who is on his sixth year in the rally and is one of the biggest fundraisers in the event. “I got into it originally just to do the rally. I didn’t even know what CF was but I thought if you’re going to do something, do it properly.”

Nic Kilah from Queensland said “I’m excited about today because coming from Queensland and seeing the hills everywhere, the landscape here is just spectacular.” The entrants in The Great Escape, which was started in 2002 raise funds and awareness throughout the year and collectively raise in excess of $350,000 annually for research into this debilitating disease.

Cystic Fibrosis is the most common genetic, recessive, life-threatening disease affecting Australian children today. Every four days, a child is born with Cystic Fibrosis and Australia has over 1 million genetic carriers of the disease which attacks the lungs, the digestive system and life itself.