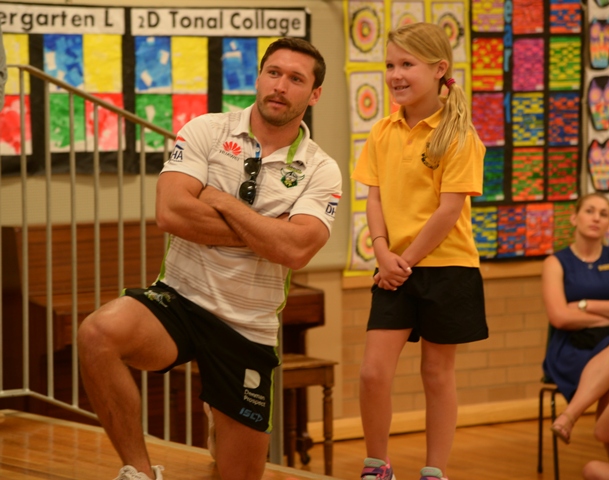 The Canberra Raiders made a thrilling visit to Canowindra Public School last Wednesday, February 17th, lighting up the faces of students and teachers alike. Players from the Raiders hosted an assembly for years’ three to six, along with representatives from the National Rugby League’s junior development office. Raiders’ players on the day included star halves pairing Blake Austin and Aidan Sezer, as well as veteran forward Jeff Lima and young guns Brenko Lee, Rhys Kennedy, Zac Santo, and Adam Clyesdale.

Around half the school participated in activities with the players in the school hall including
trivia, and educational sessions on sleep, hydration, and belonging. The trivia session saw questions displayed on stage on the projection screen, with players then asking the questions, and students raising their hands to give answers. Canowindra Public School Prinicipal, Sharon Hawker, said it was great for professional athletes to visit the school. “The students will love
this opportunity, and I’m sure they’ll love the activities they go through,” she said before the assembly.

A key focus during the assembly was healthy living, with the players promoting fruit and vegetables, as well as good ways for minors to get the recommended 11 hours of sleep and how to work efficiently as a team. The visit was one of many the Raiders attended to schools across the Central West in the lead up to their trial match last Saturday at Wade Park against the Newcastle Knights.