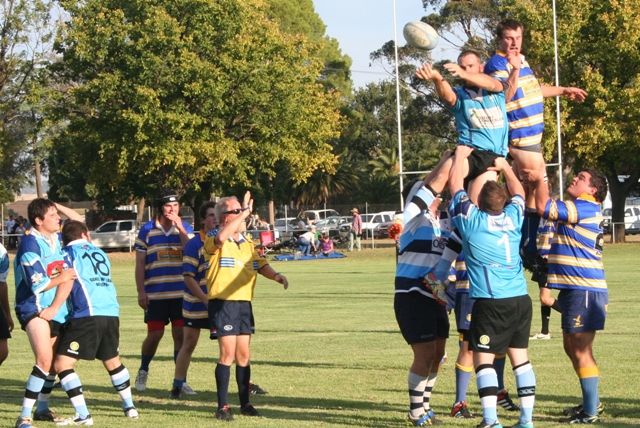 On Saturday afternoon amidst market stalls and balloon watchers, the Canowindra Pythons kicked off the Presidents Cup season with a home game against the Yeoval Eagles. The Pythons started off strong in the first half, with Dan Bowd scoring a try within ten minutes and Ben Schaefer missing the conversion to give them a 5-0 lead. Craig McKenzie quickly added to the momentum scoring another try in the nineteenth minute with Schaefer kicking a great conversion giving Canowindra a steady 12-0 lead.

Yeoval looked like they might end the first half with no points on the board but just before half time the Eagles got a penalty bringing the score up to 12-3. The second half turned into a bit of a
scrappy affair as first games tend to do. Canowindra won the scrum and went for the line with Daniel ‘Dude’ Williams taking a big hit and Jack Knight made some good runs. The Pythons fitness began to run away with them, giving Yeoval the opportunity for some decent ball time.

This resulted in their first try of the game with a missed conversion, allowing Yeoval to advance
on the Pythons lead of 12-8. But it wasn’t enough for the Eagles, with the full time whistle blowing minutes after. In the presentation after the game three points were awarded to Daniel Bowd, two points to Todd Wyburn and one point to players’ player Jack Knight. Next Saturday Canowindra will play Blayney at Blayney.