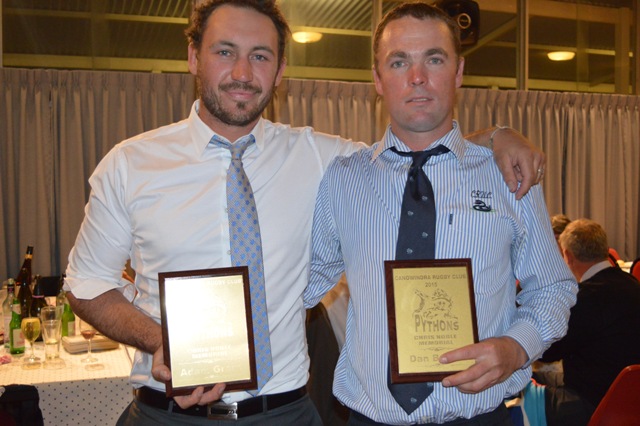 The Canowindra Pythons Rugby Union Club had their 2015 Annual Presentation Dinner at the Canowindra Bowling Club on the weekend and a good night was had by all. CEO of Central West Rugby Peter Veenstra attended and on behalf of CW Rugby presented a medallion to Ross & Liz Noble in memory of Chris Noble.

There was an inaugural award made in memory of Chris Noble which was introduced by Mark Brown who said the Club thought the award would be a great way to remember him. The award was for Most Inspirational and Helpful Player on the Field and this year there were two winners: Adam Grant and Dan Bowd, two of Chris’ best mates.

Chris’ father also thanked the Club for their support and mentioned that Precise Air, where Chris worked, has also created an award – an apprenticeship scholarship award in memory of Chris.