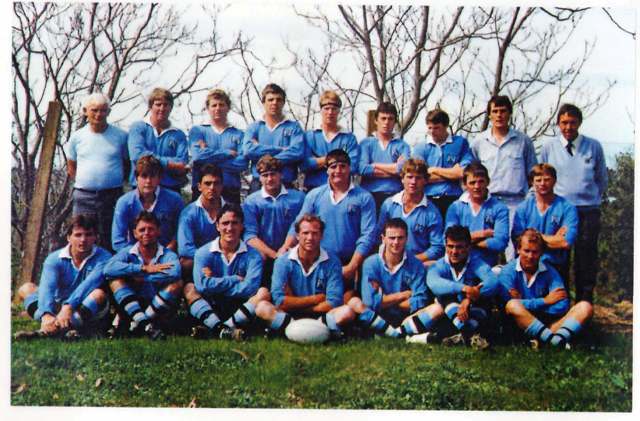 “We won that game with a good goal kicker, Albert Murray was brilliant,” says Phil. The game was played against Grenfell in reserve grade. They came out on top 13-3. The Pythons are now in a different competition to back then and it’s time for them to have a win.

When asked Phil wise words for this weekend’s team he had this to say: “Good luck, play well, party well”. Here’s the update from the Pythons game last weekend which determined who would be in the Grand Final.

The Canowindra Pythons were victorious over the West Wyalong Weevils, on Saturday’s grand final decider of the Graincorp Southern Division competition. “It’s a great achievement for the club and the boys have become a close unit this year,” Graham Rice says.

The Pythons came out strong with the forwards pushing their way up the field
and rolling mauls. Adam Grant was first to make it over the line with a big push from his teammates. Tom Roth successfully converted the goal to make the score 7-0. Mick Grant played well as he broke out of scrums and continually tackled their five-eight. With three awarded penalties against Canowindra, West Wyalong was able to get in front 9-7 before half time.

The second half saw Jack Knight on fire as he pushed over the line to make the score 12-7, then again out wide while the forwards continually drove West Wyalong back, leaving the score at 17-9. Ronald Lawrence made a lot of great
ground and good hit ups to keep the Pythons on the front foot. Luke Watt and Ed Price also played well as they were strong in the backs.

West Wyalong got another try up on the Pythons but luckily missed the conversion making the score 17-14. With 10 minutes to go Ben Schaefer kicked a penalty goal to make the score 20-14. West Wyalong were able to hold the ball two minutes after the siren until the Pythons finally gained possession and kicked the ball out to win the game.

The Pythons will now take on Blayney in the grand final this Saturday. There will be a U7s and U9s Walla rugby game to be the curtain raiser for the grand final where they will take on Milthorpe.

All supporters are encouraged to come to help cheer on the Pythons in what could make history. A supporters bus will be travelling to Blayney and if interested please contact Rob Morris.