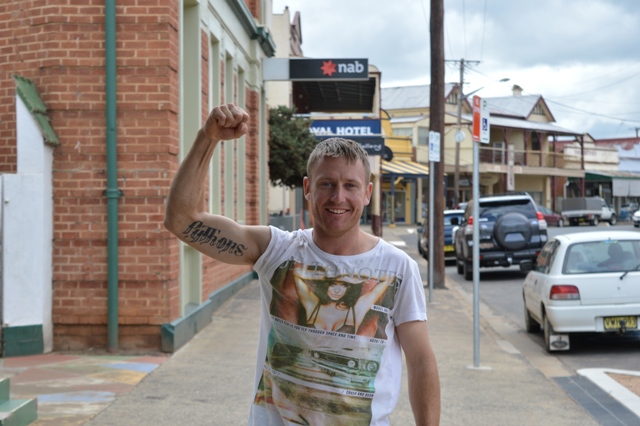 Luke Watt, a builder who lives in Canberra and returns regularly to the Central West to play rugby union for the Canowindra Pythons ran almost the entire length of the field to score a try in the Grand Final against Blayney Rams on the weekend.

“I came flying through to intercept the ball,” Luke says. “I couldn’t believe it! I knew it was a little bit of a fluke but I thought I’d get caught.” The entire Canowindra crowd of supporters jumped to their feet to cheer him on as he
ran, a highlight of the Grand Final event and the season even though they lost 32-15.

“It was a well-deserved try,” says Pythons veteran Adam Nash. “It was a really great way to cap off a good season and I was glad to see it.”

After sprinting the 70 metres on Saturday, Luke says he was “pretty sore” on Sunday. After five years of playing with the Canowindra Pythons, Luke plans to return again next year for another season with his beloved team.

“It’s such a great, welcoming club with lots of great sportsmen,” Luke says, which is probably what gave him the idea to get a tattoo in honour of the Pythons team on a Thursday afternoon two years ago.

In fact, Luke loves his team so much he is getting another Pythons inspired tattoo on his back! This piece of “art” will be revealed to the public by Luke at the Pythons Presentation Dinner on Saturday 26 September.

Luke and Adam would like to thank Sue and Geoffrey Beath for hosting the after party and bonfire on Saturday night, and also to Johnny Lawrence for lending his ute and cool room.