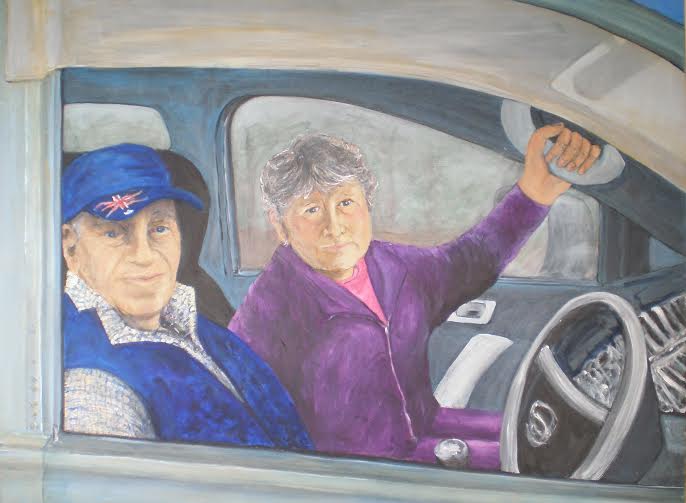 Long-time Canowindra residents will be interested to know that Julie McCarron-Benson, the eldest daughter of John and Betty McCarron who lived in Tilga Street, is a semi-finalist in the 2015 Doug Moran Portrait Prize.

Some may remember that Julie won many art prizes at the Canowindra Show as a young person and she has been able to go back to art in a mature age.

Julie has had several exhibitions and works mainly in acrylics on the representational side of art, mostly in portraits and landscapes. As she says, you can recognise what she paints. The portrait is entitled “Ted and Shirl: Grey Nomads”. It is 75x100cms and is painted in acrylics on a stretched canvas. Julie has painted the couple seated in their car which they have adapted for camping, presenting the painting as through the observer is perhaps giving Ted and Shirl directions.

The Doug Moran National Portrait Prize, now in its 27th year is an annual Australian portrait prize which encourages both excellence and creativity in contemporary Australian portraiture by asking artists to interpret the look and personality of a chosen sitter.

Selection of the thirty finalists will take place in the coming weeks and the winner of the 2015 Doug Moran National Portrait Prize will be announced on Wednesday 28 October. Good luck Julie!