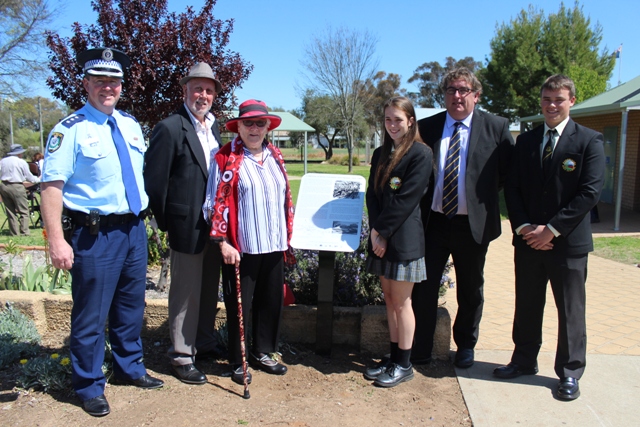 It was a proud moment for the Canowindra Historical Society & Museum on Tuesday morning with the unveiling of a memorial plaque to Senior Constable John Herbert, who was shot on duty on 13 April, 1865, and died shortly after in Canowindra.

Margaret and Greg Hahn from the Carcoar Hospital Museum were also in attendance at the unveiling in a demonstration of how the history of the land and stories of people from generations before brings towns and people together.

According to Ross Cleary from the Canowindra Historical Society, choosing 29 September as the day of the unveiling was “no accident”. “29 September is National Police Remembrance Day and by honouring this man on this day, we are adding to the national spirit. It seemed like the right day to do it,” Ross
said.

Every year the date holds special significance for police throughout Australia, New Zealand, Fiji, Papua New Guinea, Samoa and the Solomon Islands. It is a day where police pause to honour officers whose lives have been cut short while performing their duty as a police officer.

Senior Constable John Herbert was part of a team taking part in an all-out search for bushranger Ben Hall and his gang near Molong. Herbert and a fellow police officer took leave from the campsite, but when they returned
they failed to give the correct signal. Shots were fired, resulting in a fatal wound for John Herbert.

The memorial plaque tells the story of Constable John Herbert and you will find it on the Gaskill Street side of Memorial Park.