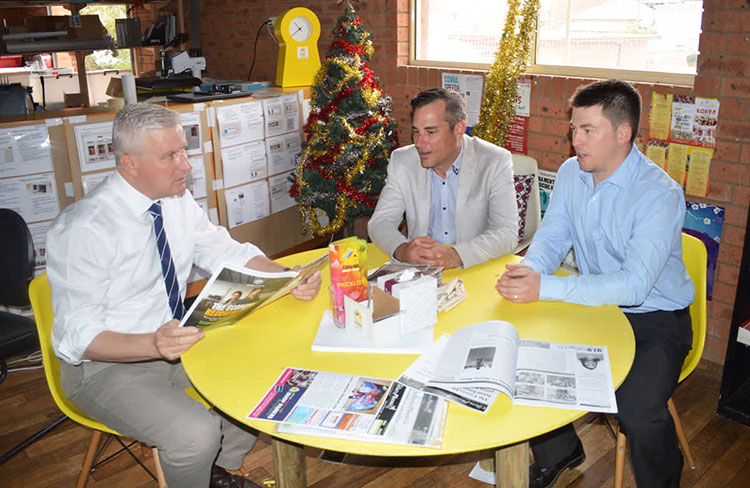 Deputy PM Michael McCormack with outgoing Sales Manager Luke Whitton and owner of the Phoenix Group of Newspa-pers Josh Matic discussing the launch of a Phoenix newspaper in Cowra.

From its humble beginnings as a town newsletter on a single piece of paper, the Canowindra Phoenix has grown to encompass a brand of newspapers which focus on the good in the small country towns west of Sydney.

After taking ownership of the brand in October 2019, Josh Matic has been working to launch two new papers in the Blue Mountains and Cowra, sisters for the Canowindra, Parkes and Forbes newspapers.

Notably for Canowindra residents, the Cowra Phoenix launched at the end of last month, bringing the Phoenix’s warm brand of community news to the Cowra area.

“The hope with all our Phoenix newspapers is to hone in on the positive, human interest, community news, while giving people stories they want to hear,” said Josh, who has a clear vision for the new Cowra paper.

“Along with starting a paper in Cowra, I want to maintain the solid presence that each of our papers have in their community. A local paper is a promotional tool. We aim to promote each town and shire in the best way we can through publishing positive news articles,” said Josh, going on to hint at an expansion to Mudgee in the next few months.

Deputy PM Michael McCormack has praised the launch of the Cowra Phoenix saying, “I have always been a big supporter of independent news and local content. As a former newspaper editor myself, I see the value and importance media organisations like the Cowra Phoenix play in their local communities.”

Josh spoke of his continuing love for Canowindra saying, “Canowindra has lots of great qualities and we are committed to highlighting that every week in the Canowindra Phoenix and now, bringing that same style of positive and uplifting news to Cowra.”

Canowindra residents can sign up for a free copy of the Cowra Phoenix by visiting www.cowraphoenix.com.au.