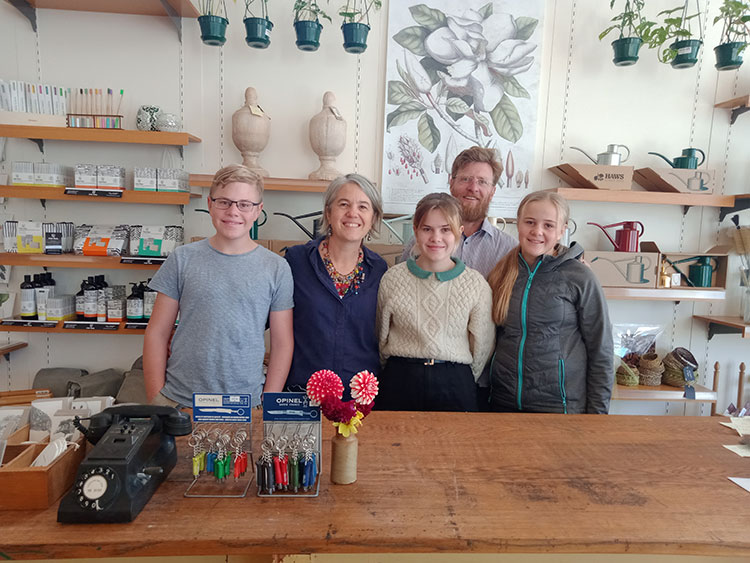 On a perfect autumn day, a once empty 29 Gaskill Street bustled again with chatter, music and the comforting hum of a coffee machine. Having heard rumours of incredible coffee, I walked up to the old Canowindra Motors building to taste it for myself. One would be forgiven for forgetting that the new Perennialle Plants is in Canowindra and is not an expensive boutique in Sydney. Yet its charm is not affected, it comes from the varied life of the old building and the care and love its new owners Nerida and Chris Cuddy have taken in restoring the building beyond its former glory.

Much like the building, the Cuddys have lead rich lives. Chris graduated from the University of Sydney, gaining honours in Horticultural Science and Nerida has a background in teaching. They met in Canowindra, where they worked together performing various roles in the Cornerstone community. Eight years ago, they began a nursery, operating it from their Rodd Street home. The business took off and the pair soon outgrew the space they had. A solution appeared to them, which Nerida believes was more than just a series of fortunate events.

“We are people of faith. We think we were nudged to buy this place,” said Nerida, over coffee. “We took a walk one day and realised what a beautiful building this was. We love history, story and heritage, so to buy this building and be able to breathe new life into it and show everyone how beautiful it is, is a real joy for us.”

The Cuddys have done just that, from scrubbing the original wooden floors, painting, wiring in new lighting and restoring the pressed metal ceiling, the space is warm and welcoming; grand, but intimate at the same time. Nerida and Chris went to great lengths to restore the front door, recreating it as closely as they could. The new store front boasts a café, run by Tom Gardner, an extensive array of garden tools, homewares and kitchen essentials, along with unique and local giftware. There is a nursery space outside, where the Cuddys will sell their rare plants with particular emphasis on plants which tolerate the extremes in temperature in this region.

As Nerida and I talked, a gentle song played on a grand piano, which has lived in the building for years. “The rule is: if you can play the piano beautifully, you can!” said Nerida, who is planning to use the space for pop-up music nights, beginning with her own album launch on 1 May.