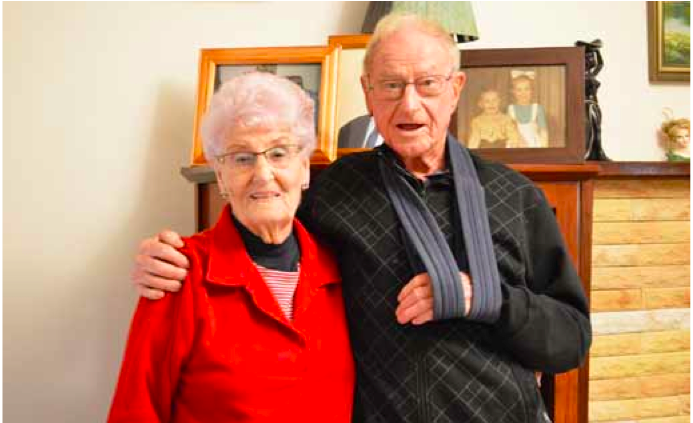 Peggy and Ron Lynch still in love 72 years on

Peg & Ron Lynch of Canowindra first met when she was 18 while she was working at Nick Malouf’s shop. Ron jokingly asked Nick ‘Can you get me a girlfriend’ and Nick turned to Peg and said “will you go out with Ron Lynch Peg?” and the rest is history.

They married in the Catholic Church in Canowindra and had their reception out at Moorbel, on the 1st July in 1942. And within the 72 years they have had two children, Susan and Robert, 3 grandchildren and

5 great grandchildren. Ron was in the Army after they married and was there for 4 years while Peggy worked at Nick Malouf’s which sold groceries, homewares and clothing. When he returned from the Army he was a Bookmaker which took him and Peg all over NSW to all the horse races, which they did for 50 years.

When asked what the secret was to such a happy and successful marriage they replied “Good food and a good lifestyle”.

“Peg is such a good cook, and I believe we have had such a good life, I wouldn’t change anything!” Ron said.

Ron and Peg have lived in Canowindra their whole lives and have travelled in and around Australia, including a trip to New Zealand and had no ambition to travel overseas.

“We haven’t seen everything in Australia yet”, they said.

Ron has accomplished a lot in his life including help build the Blue Jacket Motel and being involved in community clubs including the Boys Club. The Rotary Club awarded Ron a plaque in recognition of his contribution to the community.

Ron and Peg said they have lived a fantastic life and they always make sure they kiss each other goodnight before they go to bed.

“We have had a few arguments, like all couples, but we always made sure we made up before we went to bed and never put each other down”, Peg said.

They also enjoy going out for dinner every Friday night, and still after this longtime enjoy each other’s company. “Some people ask how I have put up with him this long!” Peg laughed.

Peg and Ron have reached their 90’s and even though they are not as fit as they once were, they are very content with their lives and what they have achieved. For their anniversary, the pair plan on hitting the town for a nice dinner. Congratulations Ron and Peg, we wish you a happy anniversary.