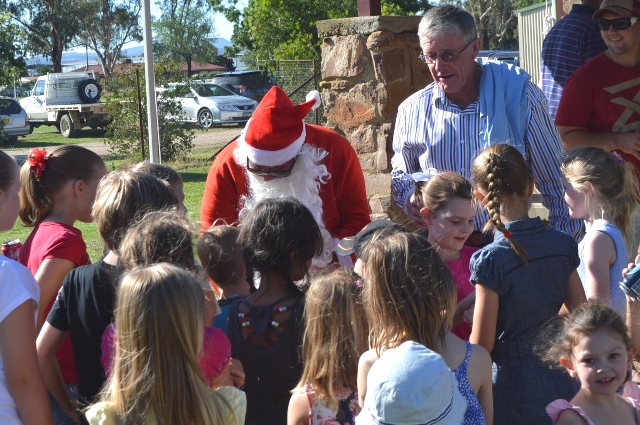 The Pythons, Walla Rugby and friends celebrated their Christmas party on Saturday. Club President Allan ‘Westy’ Wyburn is pleased with how the event went, “It was great to see the Junior Rugby turn up,” he said “I’d like to thank all the Sponsors for the year and also say thanks to Graham Rice and Rob Morris for all the hard work they’ve put in.” Father Christmas made a quick appearance to hand out lolly bags and luckily wore joggers instead of boots so he could run and visit all the other children in Canowindra. Coach Adam Nash was awarded a thank you gift engraved with an angry looking python from team Captain Daniel Bowd. When asked whether he will continue in the position next year Adam said, “I haven’t decided yet!”
Allan Wyburn reflected on the year, “We’ve had a good year, congratulations to all the boys. It’s the players themselves that keep this club going, the sponsor money only covers jumpers and insurance. The players carry the Club. We know it’s Christmas and no one’s thinking about rugby but give the season next year a thought,” he said. When asked if he will continue as President, Westy replied “The AGM is in early February so if someone puts their hand up they can have it, if not I’ll keep going.” There will be more information at a later date about training sessions, Mark Brown is encouraging any potential new players to make themselves known, “We’re always looking for new players and are trying to make the Club a more family friendly environment” he said.
By Rhi Quinn